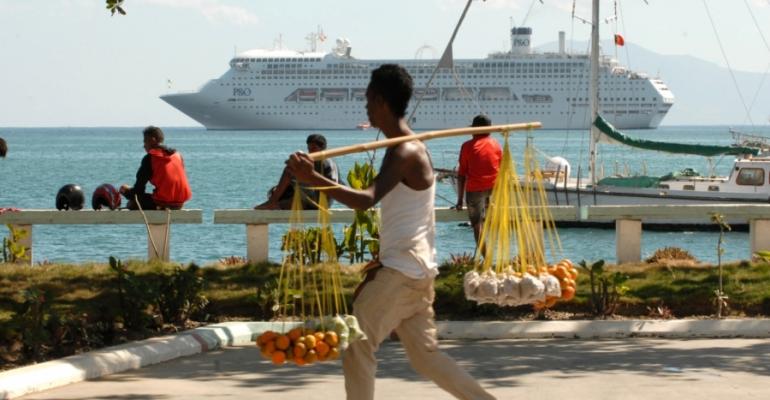 Seatrade Cruise News ran an exclusive story on May 22, 2002, with the heading 'World’s newest nation could be its newest cruise destination.'
This followed the formalisation of East Timor’s independence two days earlier after almost 400 years of foreign occupation.
Seatrade Cruise News, called Seatrade Insider at the time, predicted cruise ships could pioneer a new wave of tourism to the war-ravaged oil- and gas-rich former Portuguese colony that had been invaded by Indonesia in 1975.
Australian cruise industry pioneer Sarina Bratton took up the challenge when she launched Orion Expedition Cruises and scheduled six 10-night round voyages to Dili from Darwin in her inaugural 2005 programme.
Bratton’s maiden programme to the Democratic Republic of Timor Leste (formerly East Timor) also included calls at Baukau, the fledgling nation’s second largest city.
On June 10, 2005, the 106-passenger Orion (now Lindblad Expeditions’ National Geographic Orion) made history. Local authorities said at the time that it was the first cruise ship to visit Dili and that it had brought the largest number of tourists at one time.
Bratton had put the destination in her 2006 programme again, with Orion due to leave Darwin for Dili on June 9.
However in May 2006, after weeks of political turmoil and a warning by the then Prime Minister of Australia, John Howard, about the worsening situation, Bratton cancelled the 2006 Timor Leste calls.
Now P&O Cruises Australia is investigating Timor Leste as a cruise destination.
The 1,950-passenger Pacific Jewel called at Dili on Saturday on her return to Australia from major refurbishment in Singapore to test the port’s capacity to handle a superliner.
A second P&O Cruises Australia call at Dili has been scheduled for Pacific Eden in September 2016.
‘In addition to taking our passengers to otherwise remote destinations offering fabulous scenery and cultural experiences, cruise tourism can become a valuable part of island economies,’ Carnival Australia ceo Ann Sherry said.
‘I hope that Timor Leste’s potential to take its place on the cruising map can be realised,’ Sherry said.
Copyright © 2022. All rights reserved. Seatrade, a trading name of Informa Markets (UK) Limited.
TAGS: ports & destinations cruise lines
0 comments
Hide comments
Related