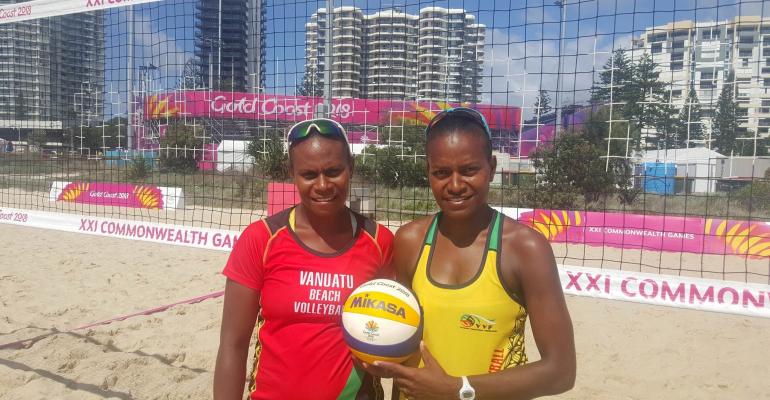 Athletes from 70 Commonwealth nations and territories will take part in 11 days of competition from April 4 -15, 2018 on the Gold Coast in Queensland.

However, athletes who bring their children with them cannot stay in the village and Vanuatu’s star volleyball player, Miller Pata, has a six-month old baby.

‘The P&O Pacific Partnership’s support means a lot to us and has been pivotal in enabling Miller and her competition partner Linline Matauatu to represent Vanuatu in this international competition where they have a real chance of a medal,’ said Stuart Gist of Vanuatu Beach Volleyball.

‘Currently, Australia, Canada, Vanuatu and New Zealand are the four top ranked teams in the Commonwealth,’ Gist said. ‘It is actually the first real opportunity to make the finals of any Commonwealth Games sport.’

Sture Myrmell,  president of Carnival Australia, said supporting the Vanuatu team was an easy decision given the close bonds between P&O Cruises Australia and Vanuatu.

‘P&O Cruises has been cruising to the South Pacific for more than 85 years and our guests share our love and respect for the people of Vanuatu,’ Myrmell said.

‘We are delighted that through the P&O Pacific Partnership our guests have an opportunity to stand shoulder to shoulder with Miller and  Linline in their quest for Commonwealth Games glory.’

The P&O Pacific Partnership is funded by a one dollar voluntary contribution applied to P&O cruise bookings and is used to fund a variety of community programmes in the South Pacific.

In 2016, the P&O Cruises Pacific Partnership donated A$50,000 to Save the Children Australia to help relief efforts in Fiji, after the island nation was severely damaged by tropical cyclone Winston.