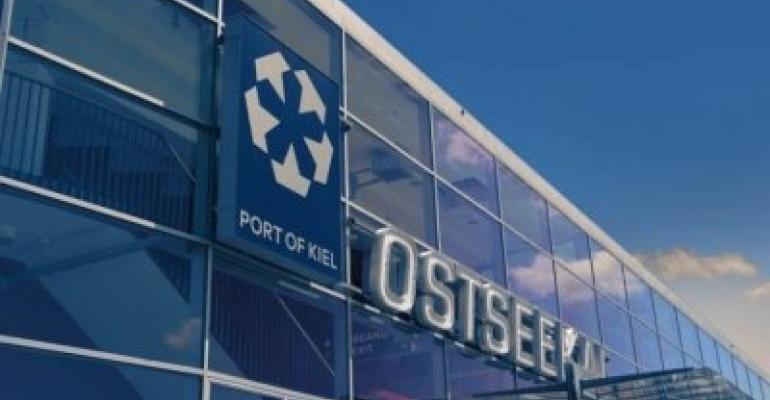 PHOTO: Port of Kiel
Police broke a blockade of Holland America Line's Zuiderdam at Kiel's Ostseekai terminal Sunday night, after a group of local radical environmental campaigners had prevented the ship's departure for nearly six hours. Arrests were made. No injuries were reported.

About 50 people were involved in the incident, the Kiel Police Department said Monday.

Officials were notified of persons approaching Zuiderdam in small boats at around 2 p.m. Sunday. They entered the Ostseekai, an ISPS area with security personnel in place during ship calls, from the seaside. Five climbed a building crane at the construction site for the facility's second terminal. Others blocked mooring ropes and climbed onto Zuiderdam's bulbous bow. Kayaks and small rubber boats gathered Zuiderdam's bow, and a banner was temporarily fixed on the hull.

According to the Kiel Police Department, the campaigners refused to establish contact with the authorities and ignored repeated demands to leave the area.

According to the Kiel Police Department, police forces from the entire state of Schleswig-Holstein were called in, along with federal police and the local fire and rescue services. After 9 p.m. a total force of about 100 officers broke the blockade. Forty-six campaigners were arrested, including five who had climbed the construction crane. An unconfirmed report in the Kieler Nachrichten newspaper said some campaigners managed to escape.

At 9:50 p.m. Zuiderdam was cleared to depart and police vessels escorted the ship to Strande Bay outside Kiel.

The arrested campaigners were questioned and later released. According to the Kiel Police Department, 12 refused to leave the site and were arrested again. They were still being held on Monday. Police operations continued until 4 a.m. Monday.

The incident sparked widespread media coverage in northern Germany. There appeared to be little public support for the campaigners' action. Most users posting comments on the local NDR website were critical, some calling the protesters 'criminals' and comparing their action to piracy.

A group calling itself 'Smash Cruiseshit' claimed responsibility for the blockade, posting a declaration on the extreme left wing indymedia platform alleging air pollution caused by cruise ships and poor working conditions for crew. The group also expressed disapproval of Ostseekai's expansion. The declaration further called for cruise ships to rescue migrants in the Mediterranean.

'Smash Cruiseshit' appears to be linked to another local environmental extremist goup, TKKG. Using aggressive slogans, this group has been involved in several recent actions, some deemed illegal. Individuals' use of cars and cruise tourism are the main targets.

The Port of Kiel did not respond to a request for a request for comment and the Kiel Police Department did not immediately answer several questions from Seatrade Cruise News. Monday is a bank holiday in Germany.

Zuiderdam was able to make up four of the six hours lost and arrived at its next destination, Copenhagen, at 9 on Monday morning.