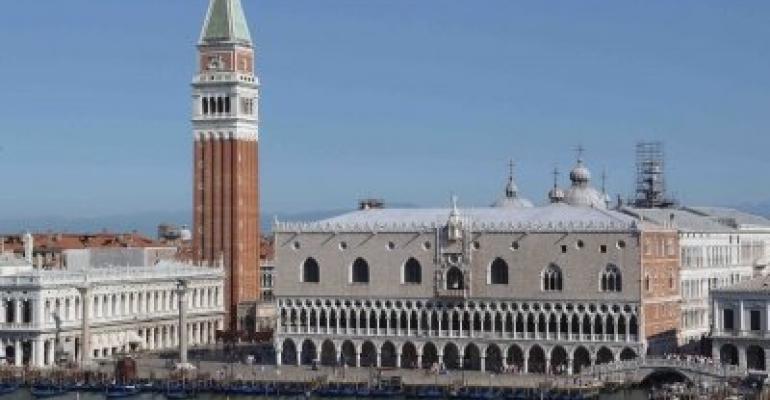 Venice regional authorities and the cruise industry are in agreement of the need to find a solution for larger ships to reach the Stazione Marittima without transiting the Giudecca Canal. But the Transport Ministry and environmental groups want to ban cruise ships from the Venice Lagoon altogether
Since 2014, there has been a stalemate over cruise ships transiting the Venice Lagoon via the Giudecca Canal and San Marco Basin.

After the Costa Concordia disaster, Italy's Clini-Passera decree banned a percentage of ships larger than 40,000gt from these areas starting in January 2014. This was later changed to ships larger than 96,000gt then overturned in 2015 following an appeal by the Venice Passenger Terminal and other parties, based on a lack of waterway access alternatives.

However, cruise lines have voluntarily kept to 96,000gt limit and also began using low-sulfur fuel in the Venice Lagoon while awaiting a new policy.

Sunday morning's MSC Opera incident reignited the debate on alternatives to maintain the flow of the cruise tourism in the Venice Lagoon.

It aroused the political parties, supported by environmental groups, who want cruise ships out of the Lagoon altogether, while the local authorities, cruise industry, port and businesses support an alternative route to reach the Stazione Marittima that maintains the business and jobs, while preserving the environment.

In November 2017, a committee led by the Ministry of Transport and Infrastructures and including representatives of Veneto Region, Venice and other towns around the Lagoon, the Port System Authority and the authority overseeing the Lagoon, agreed on an alternative route.

This would have ships pass through the Malamocco mouth of the Lagoon, instead of the Lido as they do currently, with the biggest ships going to a to-be-developed cruise terminal in Marghera's port-industrial area and the smaller ships continuing to call at Stazione Marittima. This would require dredging the Vittorio Emanuele III Canal between Marghera and the Stazione Marittima. In the three years’ time to develop this multi-stage project, a new regulation would have gradually reduced transits though the Guidecca Canal.

With the new government coalition of the Five Stars and League parties, Minister of Transport and Infrastructures Danilo Toninelli of the Five Stars party instigated a full review of the Venice situation and the 14 projects proposed as alternatives. A year has passed without a decision and, in the aftermath of Sunday's incident, Toninelli has been criticized by the Venice mayor and regional president, as well as the League party, for not acting on the matter when a solution palatable to the local authorities and cruise industry is already available.

Instead, Toninelli said the MSC Opera incident underscored the need to ban all cruise ships from Guidecca Canal.

'We are for the closure but, before, in order to maintain the cruise business in Venice, we have to find alternatives, one definitive (long term) and one temporary,' the minister said. In an interview with La Stampa published Monday, he said the government is close to a solution.

Marghera cruise terminal is off the table

After a technical meeting late Monday in Rome with the Port System Authority and Venice Lagoon authorities, Toninelli announced the Marghera cruise terminal project is no longer a consideration.

Instead, the Ministry of Transport pointed to specific feasibility studies it requested from the System Port Authority of the Northern Adriatic (Venice), delivered May 20, including three potential alternative cruise terminal sites, all outside the Venice Lagoon. One is in Chioggia, south of Venice, one is at San Nicolò, outside the current Lido entrance for cruise ships, and the third is outside the Malamocco entrance. All are in a very early stage of study and did not involve the input of local authorities and the cruise industry.

'By the end of June, we will select the (long-term) project. In the meantime, we are working on the temporary solution but that will take some months,' Toninelli said, without further elaboration.

About dredging the Vittorio Emanuele III Canal, the minister indicated the environmental protocols for the sludge to be extracted from the Lagoon's canals are being determined. 'These are expensive and complex procedures that take some time,' he said. This could suggest Toninelli is thinking of the Vittorio Emanuele III Canel access through the Malamocco mouth and Marghera as the temporary solution for cruise ship access to Stazione Marittima.

On Sunday, in the aftermath of the MSC Opera incident, Venice officials and the Ministry of the Interior's local authority, in a meeting with the port authority, law enforcement and civil protection representatives, declared the need to implement the solution agreed in November 2017.

Moreover, they asked the harbormastor's office to verify which cruise ships can already navigate the Vittorio Emanuele Canal so those could use that alternative in this busy summer season.

Both CLIA Europe and CLIA Italy welcomed this. 'The cruise industry has worked diligently with the mayor of Venice, the Veneto region, the port authority and many others, to find viable solutions to allow larger cruise ships to access the Marittima berths without transiting the Giudecca Canal,' said Adam Goldstein, chairman of Cruise Lines International Association.

'We are in agreement with the solution developed by Comitatone in 2017 to utilise the Vittorio Emanuele Canal as the best and most prudent means to move larger cruise ships away from the Giudecca. CLIA cruise lines welcome and will support the urgent implementation of this solution,' he added.