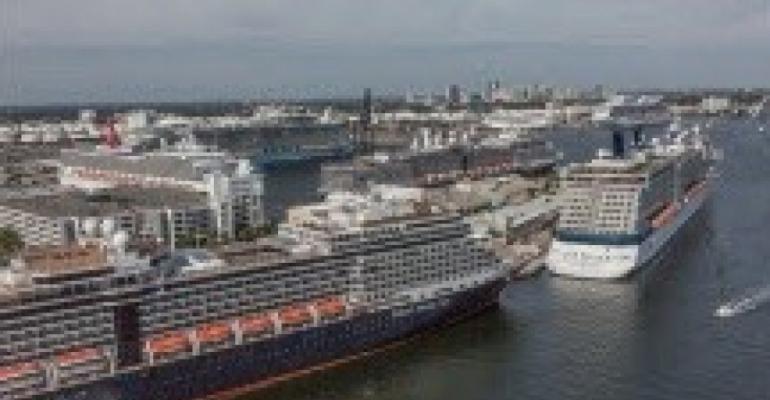 Port Everglades officials believe that Sunday—the eve of Seatrade Cruise Global's Fort Lauderdale debut—marked the second time this cruise season that the port broke its own world record with a preliminary count of more than 54,700 passengers sailing in and out in a single day.

'Breaking another world record is the perfect way to kick off the first Seatrade Cruise Global convention to be held in Broward County,' Port Everglades chief executive and port director Steven Cernak said. After 27 years in Miami, UBM's Seatrade Cruise Global is moving to the Greater Fort Lauderdale/Broward County Convention Center this week and for the next two years while the Miami Beach Convention Center is renovated.

The port's record days did not include travelers aboard Balearia's Bahamas Express ferry, which departed for a day trip to the Bahamas with almost 400 passengers.

Eight cruise ships turned around March 13, including Carnival Cruise Line's Carnival Conquest, Celebrity Cruises' Celebrity Silhouette, Holland America Line's Eurodam and Nieuw Amsterdam, Princess Cruises' Regal Princess and Royal Princess, and Royal Caribbean International's Allure of the Seas and Navigator of the Seas. These are the same ships that called at Port Everglades for the Dec. 20 peak, but because of varying spring break vacations in March the ships came in and left full of families.

Seatrade Cruise Global, March 14-17, is expected to host more than 800 exhibitors and 11,000 attendees, and is anticipated to generate more than $10m in economic impact for the area.