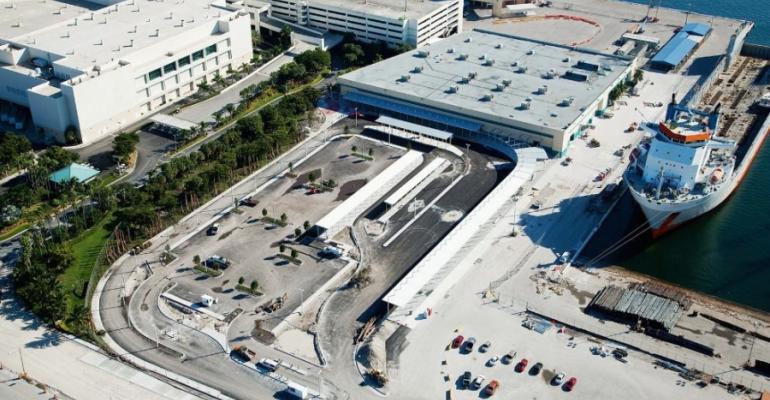 Terminal 4 expansion, from an Oct. 26 picture, shows new drop-off/surface parking area in left foreground, the terminal adjacent and, at right, the slip, to be lengthened next year. At left, the Broward County Convention Center and covered parking garage beside Terminal 2

The $24m renovation and expansion of Port Everglades' Cruise Terminal 4 adds another facility that can handle the largest cruise ships and simultaneous embarkation/debarkation. Work is nearing completion, with Celebrity Constellation set to be the first alongside Dec. 13. In a second phase, next year the terminal's adjacent slip will be lengthened from 950 feet to 1,150 feet, an $18m project.

'The update and modernization is the next natural step in our growth. We want to be able to offer the cruise lines flexibility, including the ability to berth a larger vessel,' said Steven Cernak, port director and ceo of Port Everglades.

Cernak cited MSC Cruises' move to PortMiami last year as one example of 'a wake-up call to the port.' With its Fantasia-class MSC Divina moving stateside, the line needed a larger berth on a regular basis, and Port Everglades was chock-a-block with big ships on weekends during peak season.

Now the port will have more capacity for homeporting and transit calls, and Cernak and other officials have been actively marketing to both US-based and European lines.

Terminal 4—a former warehouse—was gutted and renovated with improved lighting and acoustics, 50 check-in counters, a large luggage lay-down area and flexible Customs and Border Protection facilities. It will use two new FMT passenger boarding bridges. And with a high-efficiency air conditioning system and other advances, the terminal is expected to achieve Leadership in Energy and Environmental Design (LEED) certification.

To alleviate traffic congestion, Terminal 4 gained its own entrance and a ground transportation area separate from the neighboring Terminal 2, used by Princess Cruises. Some 172 surface parking spaces were added on the south side, where the taxi and private vehicle drop-off areas are shielded by awnings.

Moving a port security checkpoint so the entrance to the nearby Broward County Convention Center is outside the security zone and splitting the traffic for terminals 2 and 4 represents another $15m investment.

Terminal 4 has undergone 'a major facelift,' according to Dick Slater, vp and project executive for Moss, the construction contractor.

The east side of the facility has been used for cruise operations since the early 1980s, with the west side continuing as a warehouse until now. The renovation opened up the entire building, 140,000 square feet, for dedicated cruise operations.

A new grand entrance for embarking passengers is on the north side, opposite the covered parking garage, where cruisers first encounter an information area. Beyond that, they flow into a spacious check-in zone, where the colors are nautical blue and chartreuse and the floors are polished concrete.

Through Art in Public Places, Miami artist Xavier Cortada's 'The Flight of the Pelican' will adorn the 1,100-seat waiting area, and the port is upgrading its Wi-Fi capabilities (at all terminals), free to passengers, to accommodate greater demand for streaming video.

But port officials hope there won't be many people sitting and waiting. Cruise lines are moving to 'smart' check-in that cuts processing time to a matter of minutes. Conventional check-in counters remain available, too.

There are double stairways, escalators and elevators connecting to the upper level concourse leading to/from the pair of FMT passenger boarding bridges, with the ability to separate the flows for simultaneous embarkation/debarkation. Depending on how lines wish to manage embarkation, they can channel some passengers from the large ground-floor space to a smaller, upper-level waiting area.

Cruisers debark on the west side of the terminal, where there are 32,000 square feet of luggage lay-down space. CBP has its own 7,000 square feet of space, and the CBP surveillance system is independent of the terminal's and has its own emergency generator. That means if there's ever an electrical issue, CBP can continue processing passengers. Following a CBP policy change last year that requires users to pay for services, the port is funding $250,000 worth of computers, data lines and telephones.

Terminal 4 will become the sixth at Everglades to enable simultaneous embarkation/debarkation, following—originally—'Oasis' Terminal 18, then Terminals 2, 19, 21 and 26, which were renovated under the port's long-term agreement with Carnival Corp. & plc.

This will be Everglades' first LEED-certified building. The design by Bermello Ajamil & Partners incorporated sustainable features in water use, lighting and air conditioning. For example, salt is used as a desiccant to draw moisture from the air, reducing the electricity demands for cooling.

In 2008, Port Everglades signed a memorandum of understanding with Royal Caribbean for the potential development of shore power. The port pursued the matter with Florida Power & Light Co., but costs were steep They would entail an estimated $2m to $3m for each ship's retrofitting, plus $11m to get the power to the dock. The port has eight cruise berths. FPL would have to upgrade its substation and add new lines.

'We'd like to do it, but the investment is huge,' said deputy port director Glenn Wiltshire. Plus, he noted that many cruise lines are opting for exhaust gas scrubbers instead. These 'work wherever you are.'

Shore power is 'an evolving technology,' Cernak added. 'It makes sense in a place like Alaska where you have clean hydropower and an excess of it, so it's going to waste if you don't use it. Here, it would require generating more power.' So scrubbers may be a more viable near-term option for ships operating from South Florida, where low-sulfur fuel is available, too.

In what has been a fast six-month construction window, Terminal 4 work began in April/May, outside the peak cruise season, to minimize disruption, Slater said. Moss had an average 60 to 70 workers a day on site, peaking at 125.

The planning began just over a year after Port Everglades completed a massive, $54m project to renovate four terminals as part of its long-term agreement with Carnival Corp. & plc.

'We're pretty close to having renovated all terminals,' Cernak said. Next, Cruise Terminal 25 will be improved by adding an enclosed corridor to Cruise Terminal 22/24. Terminal 29 will probably be the last to get updated.

All this is 'setting the stage for future growth,' he told Seatrade Insider during a tour of Terminal 4. 'If we can make a cruise passenger's experience seamless from the curb to the ship and vice-versa, they won't remember the terminal because they just fly through. All the steps we're taking are to make the experience as seamless as possible.'