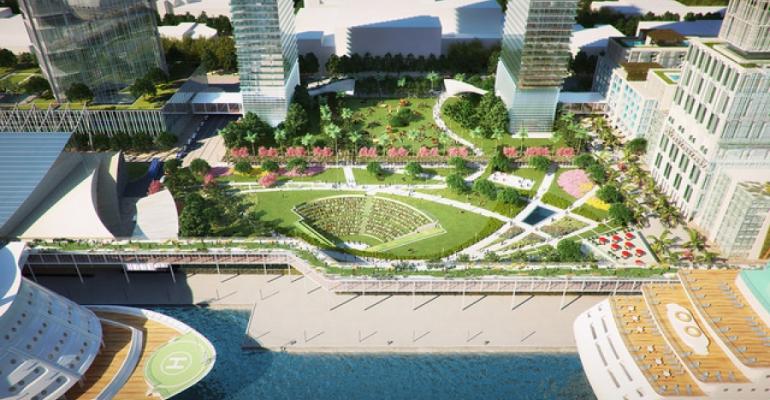 Port Tampa Bay unveiled a vision plan for its land within the Channel District—including a multipurpose cruise terminal—that aims to transform Tampa's industrial waterfront into a 'dynamic, community centerpiece where people will come to live, work and play.'

The vision plan maximizes the potential of 45 acres of port-owned land along Channelside Drive and the Ybor Channel and dramatically builds on the area's ongoing revitalization. It calls for the development of more than 9m square feet of mixed-use space and $1.5bn in private investment over the next decade or so.

'Our vision is to create a waterfront community that is the envy of other top cities around the country,' said Paul Anderson, president and ceo of Port Tampa Bay. 'This is an unprecedented development that will revolutionize Tampa and benefit the entire region.'

While still in the preliminary phase, the vision plan features a mix of private development and public amenities, from residential, retail, office and hotel space to a central park, marina and multipurpose cruise terminal. The oldest of the port's three cruise terminals, #6, would be demolished to free up real estate, while #3 would be expanded and linked to the #6 berth with a moving walkway, according to Luis Ajamil of Bermello Ajamil & Partners, the master planner.

The 'Cruise District' area of the development features the multipurpose (cruise and conference) terminal, expanded parking, a hotel/commercial building with mercado (market) and a residential tower.

Two 'landmark towers,' a key aspect of the plan, will be among the tallest and most notable on Florida's West Coast.

'Great cities like San Diego, New Orleans and Vancouver have been built around their ports,' Anderson said. 'We believe this will stand out as an innovative example of how to take full advantage of valuable waterfront, while balancing the needs of the maritime community and adjacent neighborhood.'

The plan is the result of a partnership between Port Tampa Bay, the City of Tampa and the Channel District Community Redevelopment Agency. Upgrades aim to make Channelside Drive and the surrounding area more attractive and inviting, with wide sidewalks, landscaping, bike lanes and a mix of stores and restaurants. The centerpiece central park and an elevated walkway with views of the port and cruise ships are expected to draw residents and tourists alike.

Mayor Bob Buckhorn called the plan a step to bring the waterfront back to the people and create a new destination for generations to come.

Ajamil, who said B&A created the plan over 1.5 years of work and nearly 100 meetings with the port, city and county officials and the community, noted it's rare for everyone to come together in such a major project. 'Everyone's been very constructive. We haven't heard negative comments,' he said.

Tampa's cruise growth is limited by the Sunshine Skyway Bridge's 180-foot air draft. B&A authored a 2014 study for the Florida Department of Transportation that examined alternatives including raising a portion of the bridge or building a new seaward port. Both alternatives are complex, and Ajamil said there doesn't seem to be traction for what would be at least a $2bn project.

So Tampa's cruise volumes will decline. But there are still plenty of smaller and mid-sized ships that will call at Channelside, and Ajamil said revenues from elements of the revitalization plan will help fund the cruise-related improvements there and provide revenue that serves the port. The city, meanwhile, gains a park and other attractive spaces.

The cruise-related improvements won't occur for four or five years since the non-maritime uses will need to come first to fund those.

'It's been a financial puzzle. In the end, it's a great plan,' Ajamil said.

According to the port, its vision complements Strategic Property Partners' project to turn 40 acres near Amalie Arena into a vibrant, urban neighborhood. Led by Tampa Bay Lightning owner Jeff Vinik, the project includes a downtown medical school for the University of South Florida and an office tower housing a company headquarters.