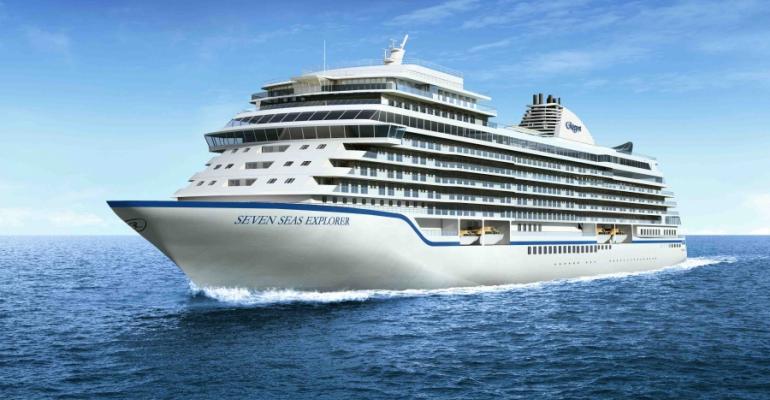 Seven Seas Explorer is scheduled to make its North American debut by sailing into Miami on Dec. 2, 2016. As part of its inaugural Caribbean season, the 750-passenger all balcony-suite ship will sail two round-trips from PortMiami to the Caribbean before heading west on a Panama Canal cruise.

Calling Seven Seas Explorer 'a labor of love' for ceo Frank Del Rio and evp vessel operations Robin Lindsay and the entire Regent Seven Seas Cruises team, president and coo Jason Montague said it's exciting to have the ship make its North American debut in 'our hometown of Miami.'

After its maiden voyage from Monte Carlo on July 20, 2016, Seven Seas Explorer will sail 10 destination-rich Mediterranean cruises before traversing to North America on a 16- night 'Atlantic Retreat' voyage from Civitavecchia (Rome). From Miami, the ship will embark on a 14- night 'Serene Islands' round-trip voyage on Dec. 4 followed by a 10-night 'Caribbean Dawn' round-trip on Dec. 18.

Seven Seas Explorer will ring in the New Year with a 16-night 'Grand Canal Crossing' from Miami to Los Angeles with stops throughout the Caribbean and Central America.

Seven Seas Navigator will spend most of the year in the Mediterranean, a departure from the ship's traditional residence in Alaska. In total, Seven Seas Navigator will sail 20 Mediterranean voyages before embarking on a 24-night 'African Expedition' on Oct. 23 that ends in Cape Town. Next comes a 15-night 'Sumptuous Safaris' voyage on Nov. 16 before the year ends with a 35-night sailing from Cape Town to Miami.

All three African voyages will offer complimentary pre- or post-cruise African safaris for passengers booked in a concierge suite or higher.