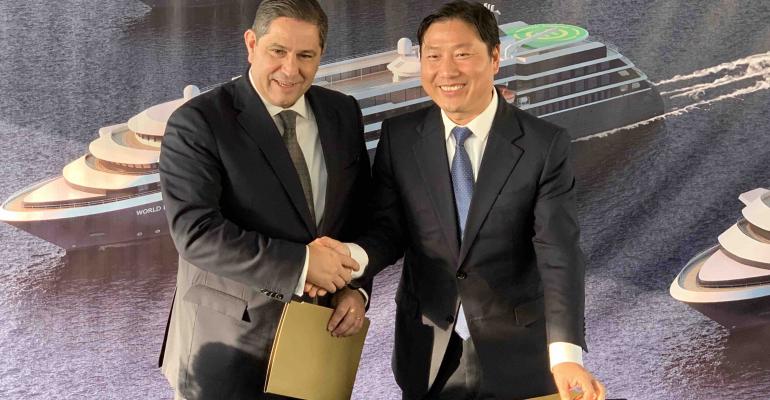 On a day when Portugal's Mystic Invest signed for €165m in financing from China's ICBC Leasing—which covers sale-lease deals for three expedition cruise ship newbuilds at WestSea Viana—principal Mário Ferreira told Seatrade Cruise News his company is opening a US office to promote expedition and cultural sailings under the Mystic Cruises brand.

The ships are 2019's World Explorer, 2020's World Voyager and 2021's World Navigator. World Explorer was actually due for delivery around now, and should have been headed to Antarctica for a seasonal charter by Quark Expeditions. Instead it will arrive in April, going directly into a sold-out European season for Germany's Nicko Cruises, a Mystic company.

Ferreira said he'd been working on the ICBC deal for a year, and had solicited Chinese money during a road show to Shanghai, Beijing and Hong Kong. (ICBC has also been involved with newbuilds for Silversea Cruises and Viking Cruises.)

Mystic Cruises' US office, likely to be located in Fort Lauderdale, Florida, is scheduled to open in first quarter 2019, and will start with a staff of 10 sales and marketing professionals to work with travel agents and consumers. Recruiting is under way. Miami-based owner's representative Alberto Aliberti is helping Ferreira establish the office.

Ferreira also disclosed that Mystic is not going to be as charter-oriented as originally planned. Instead, it intends to operate most sailings on the new ships for Nicko Cruises and, newly, under the Mystic Cruises banner stateside.

'We already have charters and products serving American clients,' he said. It's just that they aren't Mystic branded.

'We need a small fleet soon,' Ferreira added, reiterating his intention to build 10 of the 9,300gt, 176-passenger ships. Nicko Cruises' 2019 European program on World Explorer—in the Mediterranean, Baltic, Norwegian fjords, Iceland and Greenland—sold 'so well and so fast,' as he put it.

'Our ship size allows us to go to all these nice places and historic centers,' Ferreira said, noting that it's possible to dock in prime, city-center locations such as the heart of Russia's St. Petersburg and near St. Mark's Square in Venice.

Going forward, Mystic plans to branch out to offer itineraries to Cuba and Costa Rica with 2020's World Voyager.

However, when it comes to charters, Ferreira said Quark Expeditions is not only taking the first ship, World Explorer, for the 2019/20 Antarctica season, it also has secured the vessel for further stints in Antarctica through 2023 and for one season in the Arctic, in 2020. And this even though Quark is building its own ship, at Brodosplit in Croatia, for delivery in September 2020, in time for Antarctica sailings.