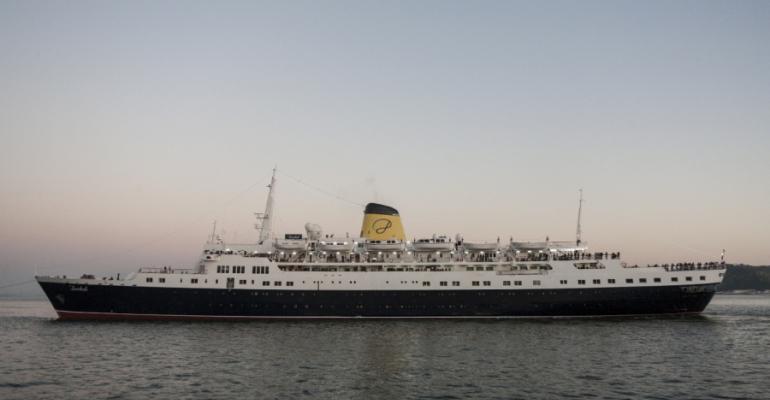 New-look Funchal with distinctive 'P' on funnel for Portuscale Cruises

The 465-passenger Funchal, a former Portuguese presidential yacht, was based in Fremantle for CIC Australia’s annual extended season from 2004 until 2007 when she was replaced by the larger 600-passenger Athena.

CIC went into voluntary administration on October 31, 2012, and was placed into liquidation two months later following the arrest of Athena in Marseille for non-payment of bills.

Discover the World gm marketing and operations, Olga Korobko, said Funchal, which has undergone a $22m rebuild, will sail from Barcelona on January 4 on a 44-night southbound voyage to Geelong, 75kms southwest of Melbourne.

Korobko said she will operate cruises between Geelong and the NSW regional port of Newcastle, 170kms north of Sydney.

On March 10 Funchal will make a 56-night northbound repositioning voyage from Newcastle which will be marketed under the banner ‘Battlefields and Centenary at Anzac Cove.'

Passengers will be able to see the lights on shore at Anzac Cove on April 25 while they watch the dawn service live on a big screen on deck.