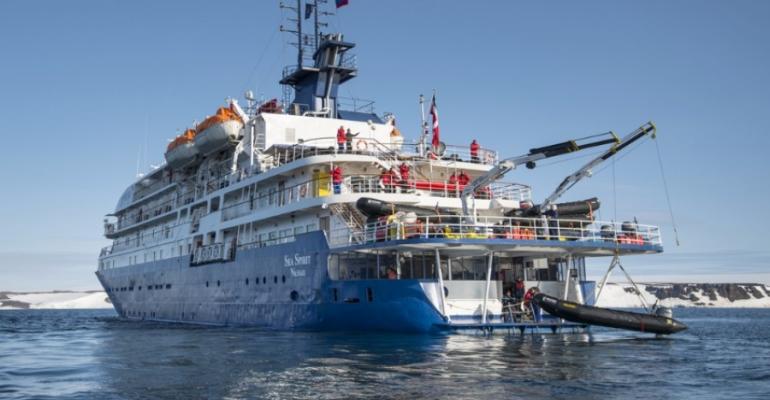 Poseidon Expeditions' Arctic cruises in 2017 include a voyage that explores Iceland’s northern fjords and follows the Arctic Circle east to the Norwegian coast where a number of stops are planned before proceeding north to Bear Island and the Spitsbergen Archipelago. The program on Sea Spirit will operate June 15-29.

A cruise directly from Spitsbergen to Franz Josef Land in the Russian High Arctic is scheduled for Aug. 14-29.

Arctic rates in 2017 for the all-suite Sea Spirit begin at $8,395 per person, double occupancy, and if three people share a Triple Suite the rate is $5,995 per person. New for 2017 will be the inclusion of a pre-cruise hotel night in Reykjavik, Iceland, or Longyearbyen, Spitsbergen, depending on the itinerary.

Following the last Arctic voyage to East Greenland in mid-September 2017, the vessel will reposition to South America for cruises to the Antarctic Peninsula, South Georgia and the Falkland Islands/Malvinas during the 2017/18 austral summer. The new Antarctic season will include an Antarctic Circle cruise, which travels below the most southerly of the earth’s five major circles of latitude, approximately 66º south.

For both the Arctic and Antarctic seasons, travel agents and consumers can take advantage of early booking savings of 10%-15% off regular rates. These savings are available through September 2016.

'Having now successfully completed our first 2015-16 season in both the Arctic and Antarctic—with great passenger experiences and satisfaction levels—we’re gratified to launch a third season of expedition voyages for those with the spirit of polar adventure in their hearts,' said Nikolay Saveliev, president of Poseidon Expeditions.

The complete 2017-18 Arctic and Antarctic schedules, rates and special offers are at www.poseidonexpeditions.com. A new 80-page catalog detailing the company’s ships and activities is also available, and can be requested online.