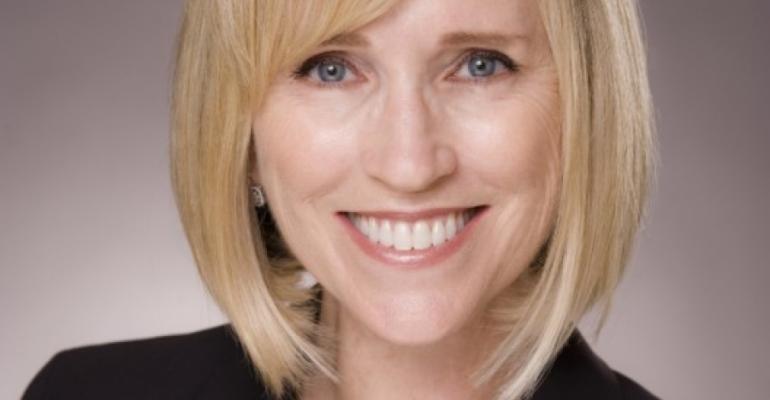 In more than 32 years with Princess Cruises and Sitmar, Julie Benson has been involved in virtually all the major company milestones, created billions of media impressions and played a critical role in 'building our culture and the powerful global brand Princess is today,' president Jan Swartz said.

Benson, vp public relations, is retiring at the end of May after an eventful career including orchestrating an astonishing 23 ship inaugurals featuring royalty, celebrities, a president and a prime minister.

'We are grateful for her contributions. She is truly a Princess person,' Swartz said in a company memo that added her admiration for Benson's 'positive attitude, exceptional creativity, grace under pressure, masterful diplomacy skills, pride in our product and compassion with others.'

Benson, who has led the line's public and media relations initiatives, community efforts, crisis response and social media strategy, is 'one of the consummate public relations professionals in the cruise business,' according to Paul Lasley, president, On Travel Media. He attributed her effectiveness to 'integrity and accessibility along with the value she places on building media relationships.'

Lasley added that in Hollywood, where 'publicists are tolerated at best, the cast and crew of "The Love Boat" all speak with affection, admiration and respect for Julie.'

Benson is proudest of contributing to the company's growth and success over the last three decades, working alongside 'an amazing group of colleagues.'

'I've always said I think that I've had the best job in the company,' she told Seatrade Insider. 'Public relations is a fascinating profession. We play an important role in helping to shape the reputation of a company, and during my time with Princess I've been able to do this through special events, media roadshows, ship launches, press cruises, shipyard visits, TV and movie shoots, celebrity tie-ins, blogs and social platform development, to name just a few. Every day is different and invigorating.'

Over the last few years, it's been exciting to be part of the team introducing Princess cruises throughout Asia.

'My time in Japan, China, Taiwan and Singapore has been fascinating and it's rewarding to see cruising starting to take off in this region of the world,' Benson said.

For the inauguration of 23 ships, she was responsible for producing the ceremonies and recommending the godmothers selected for each. Highlights have ranged from Kate Middleton, the duchess of Cambridge, to Olivia de Havilland, 'The Love Boat' cast, Ali McGraw and Ryan O'Neal, Jill Whelan, Trista and Ryan Sutter, Martha Stewart, Sophia Loren, Florence Henderson and Marion Ross.

'Each event was an amazing experience and resulted in millions of media impressions, which is what I was tasked to achieve,' Benson said.

A standout highlight was the recent Regal Princess inaugural.

'It had a celebrity-filled Love Boat theme, but it also authentically celebrated Princess' history while looking toward the future,' Benson said. 'Not only was it a huge publicity success, but according to the feedback received, it truly resonated emotionally with the guests on board as well.'

On a personal note, Benson is also pleased that because of her job she could introduce her parents to Princess cruising, and over 20 years they explored the world. She got 'such joy from being able to help them discover their passion for cruising and travel.'

Benson studied journalism and worked for a couple agencies before signing on with Sitmar as public relations manager in 1983. She was promoted to director of corporate communications, and in 1988 when P&O acquired the Sitmar ships for its Princess line, Benson joined Princess as PR director. She held that role for 16 years, including three with dual responsibility for Cunard Line. She was promoted to vp in 2007.

The biggest challenges she's faced related to incidents on the ships.

Even though major incidents are few and far between, it's typically a challenge to ensure the line's side of the story is told 'accurately and fairly, and that consumers and press know that we always aim to do the right thing in the event of an unfortunate situation. The best approach,' she added, 'has always been to be open, transparent and compassionate. And deep breathing!'

In the early days, Benson's focus was on working with press to develop positive stories about the company and cruising, and there wasn't a great deal of negative news to deal with. As the industry has grown and become more popular and visible, increasing scrutiny changed the job to include much more issues management and crisis communications.

'A big change in this regard is that we're better able to bring our story directly to consumers through digital publishing and social media conversations,' Benson added, noting that social media changed everything.

'But the fundamentals of the PR profession remain: building strong and honest relationships, and sharing compelling stories.'

Among mentors and colleagues who were influential, Benson counts Peter Ratcliffe, former president and ceo, who was instrumental in the growth of the company and the industry.

'He pushed us all towards excellence,' she said.

Benson also greatly admires current president Jan Swartz, as 'a leader, a colleague, an innovator, a mother and a person [who] inspires me every day. I wish I could bottle her wisdom, and her ability to get things done and drive results.'

And Benson credits her 'amazing PR team who make us successful,' and her husband, Bruce Krumrine, vp shore excursions for Princess, Holland America Line and Seabourn, who has always been her 'biggest supporter and provides excellent advice.'

Post-Princess, Benson's first mission will be to focus on her two sons as they prepare to finish high school and college. Since she's always been a full-time working mom, this will be a new experience for her and them. And she's got 'a very long list of projects and interests I'm looking forward to.'

'When I depart Princess, there will be so much I will miss. But most of all it will be the people I've met and worked with—our fantastic on-board crew members, my shoreside colleagues, the press and my PR team. I will look forward to following their future successes, which I'm confident will be many.'