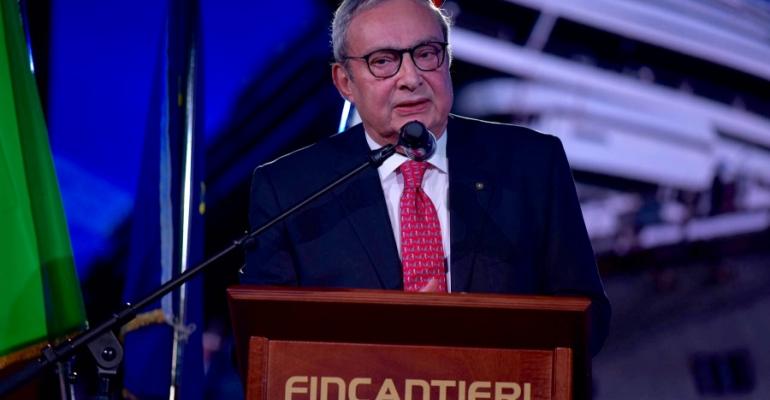 Giuseppe Bono - order is 'by far, one of the most important ever received by Italian industry' (Photo: Fincantieri)

Carnival Corp. & plc firmed a previously announced order for five newbuilds at Fincantieri. Princess Cruises is now getting two ships—only one had been disclosed previously—and the others are two for Costa Asia and one for P&O Cruises Australia, as earlier reported. The total order is valued at more than €3bn.

Carnival and Fincantieri had reached a memorandum for five ships in March last year, and four of those were assigned to brands in December.

The news was announced Saturday during festivities on board Holland America Line's recently delivered Koningsdam, where the contracts were signed by Carnival Corp. chairman Micky Arison and Fincantieri ceo Giuseppe Bono, in the presence of Graziano Delrio, Italy's minister of infrastructure and transport.

'Today has been especially exciting for our company, our partners and our guests, as we celebrated the arrival of our amazing ms Koningsdam ship and officially signed agreements with Fincantieri to build five new cruise ships for the future,' said Arnold Donald, president and ceo of Carnival Corp. & plc.

'Using our strategic fleet enhancement plan to delight our guests is an important part of our measured growth strategy, which includes replacing less efficient ships with newer, larger and more efficient vessels over a very specific period of time,' Donald added.

Bono called the order 'by far, one of the most important ever achieved by Italian industry,' and said it confirmed Fincantieri's worldwide reputation for quality and product diversification.

The Princess vessels are 143,700gt, built on the Royal Princess platform. The pair of 135,500gt newbuilds for Costa Asia are destined for the China market, while the 135,500gt P&O Cruises Australia vessel will carry 4,200 passengers—way more than the brand's next largest ship, which has capacity for 2,250 passengers.

The ships will all be built at Monfalcone and Marghera from 2019 through 2020.

Fincantieri was also represented by chairman Vincenzo Petrone, and former Fincantieri chairman Corrado Antonini, who retired in 2013, was there, too.