Princess goes to 5 ships in Europe next year, down from 6, but adds ports 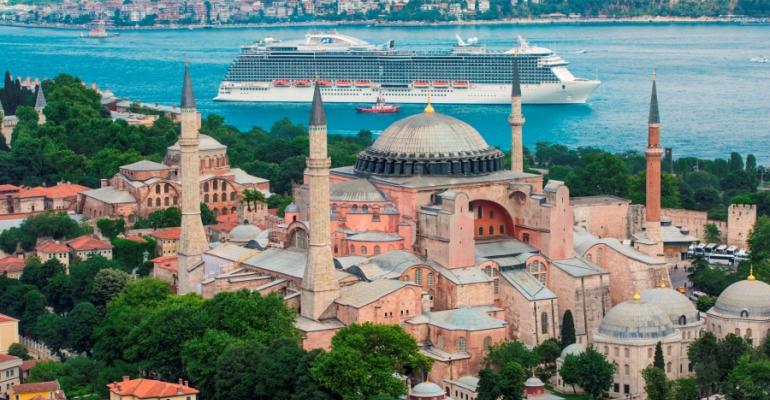 Princess Cruises' 2016 Europe program has five ships sailing to more than 130 destinations, including a number of new ports for the line, compared to six vessels calling at more than 120 destinations this year.

In the Mediterranean Royal Princess will sail a variety of seven-, 14-, 21- and 28-day cruises from Barcelona, Civitavecchia (Rome) and Piraeus (Athens). 'Mediterranean Medley' 14-day sailings include destinations rich with ancient history including Rome, Athens and Naples. Collection voyages will cover the entire Mediterranean region visiting Spain, France, Italy, Tunisia, Malta, Greece and Turkey during 21 days. The ultimate 28-day 'Circle Mediterranean' voyages will call at 20 destinations in seven countries with all cruises visiting Rome, Athens, Istanbul and the French Riviera.

Pacific Princess will operate a variety of 12-day voyages from Civitavecchia, Venice and Barcelona to a mix of marquee ports and those that can't be reached by larger ships.

Regal Princess returns to Northern Europe for 11-day cruises to Scandinavia and Russia featuring two full days in St. Petersburg. Emerald Princess will sail a number of 14-day cruises through the Baltic Sea.

Caribbean Princess will be dedicated to the British Isles for the entire summer season and visit key destinations in the UK, Ireland and Scotland, with two opportunities to see Scotland’s Edinburgh Military Tattoo on the grounds of Edinburgh Castle.

Pacific Princess will explore the British Isles on 14-day 'Irish Counties & Scottish Highlands' cruises from Dover. The itinerary includes maiden calls at Ullapool, Scotland, and Galway, on the western coast of Ireland.

Pacific Princess's 14-day Iceland and Norway cruises visit less frequented ports in Iceland and the Shetland Islands. The ship will also call at Iceland on a trans-Atlantic voyage.