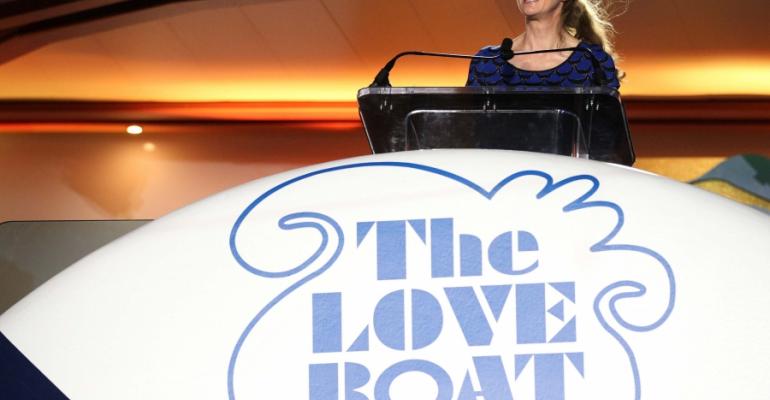 Jan Swartz at Regal Princess inaugural festivities in Fort Lauderdale, which were covered by reporters from Asia among the international media

Sapphire Princess, which just completed its first season of sailings from Shanghai, got 'very high satisfaction scores which exceeded our fleet average,' Princess Cruises president Jan Swartz said Thursday. That tells her the brand settled on the right touches to please this new and growing market.

The four-month program was estimated to carry 65,000 passengers on round-trip cruises.

How Carnival Corp. & plc will proceed with the recent memorandum of understanding with China State Shipbuilding Corp. to explore a possible joint venture that may include developing a national brand for Chinese travelers remains to be seen.

'For us, right now, we're very focused on building the Princess brand in Asia,' Swartz told Seatrade Insider during an interview at Fort Lauderdale inaugural activities for Regal Princess. Currently the company is preparing its summer 2016 deployment, which is likely to be evolutionary, not characterized by dramatic changes.

Among the media aboard Regal Princess were 15 reporters from Asia—including China, Japan and Taiwan—mainly on assignment from travel publications such as China's Travel+Leisure. A few were business reporters.

Within Carnival Corp. & plc Princess is one of the brands playing a lead role in the company's Asia expansion. Princess has a dozen offices in six countries including five in China, as well as Taiwan, Korea and Singapore. Soon to come will be a third location in Japan, supplementing the Tokyo and Kobe offices. All the offices sell Princess and Cunard and, in Japan, Seabourn, as well.

Swartz is well-versed in Asia and frequently travels there. Before becoming president last year, her evp duties included overseeing international sales and marketing, and she was responsible for the company's strategic planning. She has worked closely with the Asia sales and marketing teams, all formerly general sales agents, for about 15 years.

The Princess spirit in developing Asia is 'hugely entrepreneurial,' Swartz said. 'To an extent, where we are in Asia is not too different from where [Princess founder] Stan McDonald was 50 years ago, having the feeling that Americans would love cruising, and us having a feeling that Chinese or Taiwanese or Koreans are going to love cruising.

'We bring to those markets 50 years of experience. The fun is being agile and nimble and adapting as things develop.'

Senior vp Tony Kaufman, who oversees Asia from the line's Santa Clarita, Calif. headquarters, has done a 'great job of helping lead our teams and bring knowledge to the mother ship,' as Swartz put it, while the brand has close ties with its former ceo, Alan Buckelew, now Carnival Corp.'s chief operations officer, based in Shanghai.

'The corporation considers us a global mega-brand with many opportunities to bring the joy of cruising to various nationalities,' Swartz said, adding that the Princess on-board experience and itineraries have 'universal appeal with relatively modest adaptations to local needs' such as modifying menu items.

The line's demographic in Japan is older because the population skews older and Princess offers longer cruises. The sailings draw mainly retirees.

In China, Princess carries younger passengers, in their 30s and 40s, who often bring a child and their parents. There, itineraries are shorter because people take very limited vacation time.

Wherever Princess operates, it targets 'meaningful travelers'—people of any age who seek enriching experiences, which they get from Princess by visiting a variety of destinations, learning about the culture and tasting the foods.

'In Asia, there's a very strong desire to travel as a means of learning new things. The Princess brand offering will be very successful there,' Swartz predicted.