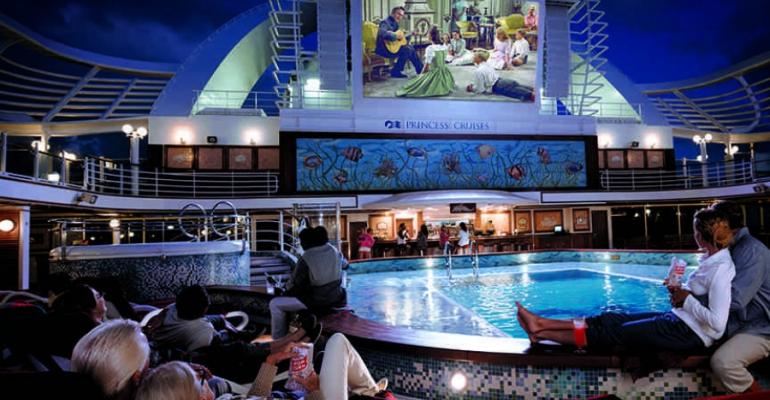 Princess will air 'The Sound of Music' on its Movies Under the Stars top deck screens and feature sing-a-longs, trivia games and more for the 50th anniversaries of both the cruise line and the musical
Beginning mid-April, Princess Cruises will partner with Twentieth Century Fox Home Entertainment to screen the biggest movie musical of all time, 'The Sound of Music,' on board all 18 of its ships. The line will also feature sing-a-longs, trivia games and other movie-themed experiences throughout the year.

These offerings celebrate the 50th anniversaries of both Princess and the musical and are part of a year-long campaign to honor the classic film.

In addition, Princess is offering movie fans chances to win a free cruise and a $500 on-board gift card every month through December. Details are at www.princesscruises.com/SoundofMusic.

A phenomenon upon its debut in 1965, 'The Sound of Music' won five Academy Awards, including 'Best Picture' and continues to draw audiences around the world with songs like 'Do-Re-Mi,' 'My Favorite Things,' 'Climb Every Mountain' and 'The Sound of Music.' The movie stars Oscar winners Julie Andrews and Christopher Plummer.

'The Sound of Music' will be shown once on every sailing throughout 2015 on Princess ships' giant Movies Under the Stars top deck screens, with the sing-a-long version featured in the Princess Theater. Song birds can meet and rehearse for a special 'The Sound of Music' edition of Princess Pop Choir and a themed trivia challenge will test fans' movie knowledge.