Princess pulls back to one ship in Japan, adds shorter cruises 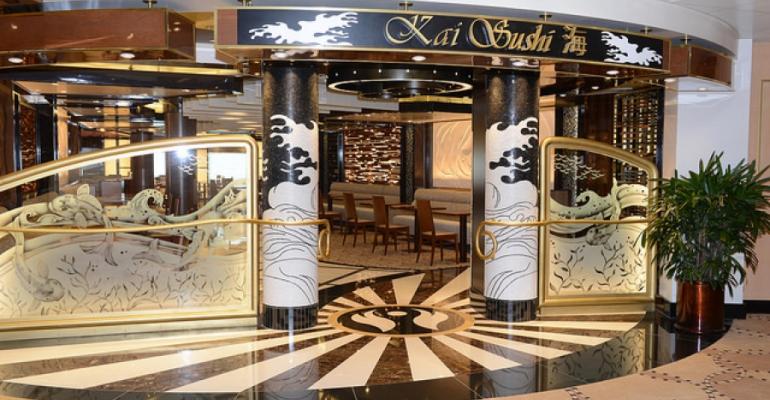 Diamond Princess just emerged from a $30m upgrade that added Kai Sushi restaurant, among other features

For 2015, its third season in Japan, Princess Cruises will deploy Diamond Princess but not Sun Princess, which is going to Australia. The line will also introduce cruises as short as three nights to appeal to local travelers seeking a quick get-away.

Beginning next April, the Japanese-built Diamond Princess will operate sailings from Yokohama (for Tokyo) and Kobe. Twenty departures on a mix of itineraries will visit more than 20 destinations in Japan, Korea, Taiwan and Russia. Sailings will range up to 17 nights.

'Like many new markets, when you enter, you have to invest,' Carnival cfo David Bernstein told analysts on March 25. He added: 'It's a nice way of saying we are losing some money in the market but we are bullish long-term.'

Shortly after the call, Princess reassigned long-time senior executive Tony Kaufman from svp commercial operations to svp Asia operations, a newly created job that focuses on the company's program to place ships in both the Japan and China markets.

Princess entered the Japan market with one ship for a three-month period in 2013 and is deploying two ships for six months this year as the larger Diamond Princess joins Sun Princess for an April to October season. Next year's program stretches 4.5 months.

'Moving Sun Princess to Australia in 2015 doesn’t diminish our enthusiasm for the Japan cruise market,' Princess president Jan Swartz said Monday. 'As demand for cruising grows further in Japan, we will review the opportunity to add additional capacity in the future.'

Diamond Princess will begin the 2015 season on April 29 in Yokohama with an eight-night Golden Week itinerary and a nine-night Taiwan and Korea sailing. The ship will then position to Kobe for a series of three, eight-night Ryukyu Islands and Taiwan voyages that call at Okinawa, Hualien, Kaohsiung and Taipei (Keelung). New for 2015 from Kobe is a 10-night Hokkaido cruise that includes the northern destinations of Aomori, Hakodate, Otaru and Abashiri.

Diamond Princess will return to Yokohama to spend the balance of the summer sailing north to the island of Hokkaido or around Japan, visiting culturally rich destinations such as Maizuru (for Kyoto), Nagasaki and Aomori. A special feature of the Hokkaido voyages is the late evening departure from Hakodate, which is famous for the nighttime view from the top of Mount Hakodate, as well as the morning fish market.

Diamond Princess just underwent a $30m refurbishment at Singapore's Sembawang Shipyard that added Izumi Japanese bath, the largest of its kind at sea, as well as a Kai Sushi restaurant, new shopping areas and other features.

Dining room menus serve international Princess cuisine, while additional offerings cater to Japanese tastes, and an a la carte sushi bar will be opened. Other amenities such as the spa treatments are tailored to Japanese preferences, and on-board collateral items and stateroom information will be translated into Japanese.