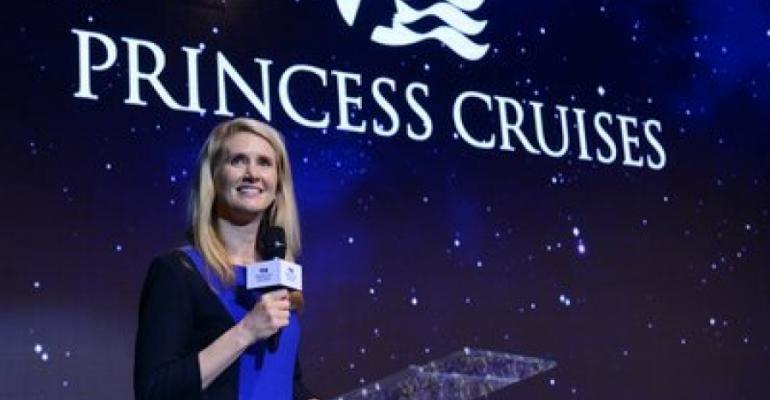 Princess Cruises unveiled its new brand positioning in China as the 'Global Travel Master,' offering an international premium cruise experience that is sure to make them feel like a princess. The line also announced a new homeport, Xiamen.

The new branding is brought to life by a mini-movie, 'Where's the Princess?' featuring celebrity couple, Emma Pei and Rojamtic Wang, who attended a Shanghai news conference on Friday.

The film serves as the centerpiece of the new marketing campaign. The storyline follows the couple as they explore the ship's experiences and venues while searching for a real-life princess. At the end, it is revealed who the real-life princess is.

In addition, Princess will expand its presence with a new homeport in Xiamen.

A full original score for the film was written and produced by Emmy-winning composer Ali Heinwein, and recorded in part at Capitol Records Studio in Los Angeles. Noted Chinese voiceover artist, Zirong Tong, best known for his work in 'Zorro,' provided the signoff narrations.

'With this new brand positioning as the Global Travel Master, we look forward to more Chinese guests feeling like a princess by offering them an unparalleled premium and international vacation experience during the upcoming China season,' Princess president Jan Swartz said.

New programs planned for the 2016 China cruises include a Royal French Edition of the World Leaders' Dinner; Fete Francais, with French-inspired group activities, classes and performances; 'Crafted by Curtis Stone' menu items from the Australian celebrity chef; enhanced 'Chocolate Journeys' with special treats by pastry chef Norman Love; and an array of international and Chinese guest entertainers. These include famous jugglers, acrobats and magicians.