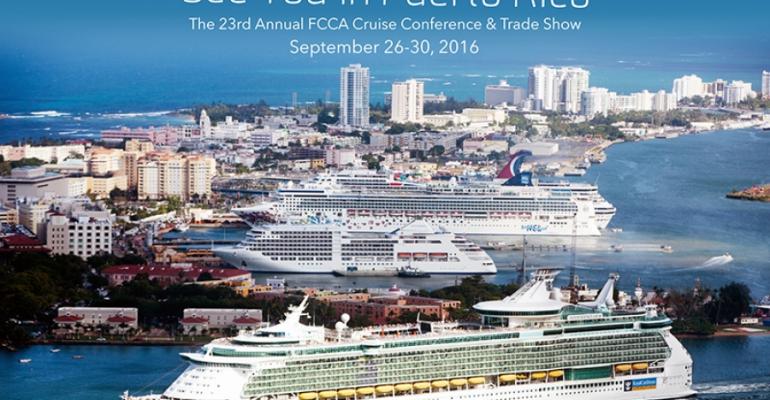 From triple-digit growth in passenger and vessel arrivals to the development of new piers and cruise destinations, destinations for the annual Florida-Caribbean Cruise Association Conference & Trade Show have have directly benefited from hosting the event, according to FCCA data.

The conference and trade show, now in its 23rd year, typically draws about 1,000 attendees, among them more than 100 executives, including chairmen, chief executives and presidents, from FCCA's 19 member lines.

Carnival Corp. & plc/FCCA chairman Micky Arison said the focus of the event is to create a stronger economic impact for all involved. He added he looks forward to seeing the positive results from Puerto Rico 'displaying its improvements in infrastructure and products, along with its ability to organize an event of this magnitude.'

After last hosting the FCCA gathering in 2011, Puerto Rico chalked up a 10% increase in passenger arrivals. According to data from FCCA member lines, in 2010 San Juan received 1.37m cruisers, a number that rose to 1.51m in 2013, two years after the event, the normal cycle of itinerary planning. The growth continued, with San Juan's cruise arrivals going to 1.62m last year.

The business had an economic impact of $198.2m in passenger, crew and cruise line spending, in addition to 5,209 jobs and $75m in wages generated through cruise tourism during the 2014-15 season, according to the Business Research & Economic Advisors 2015 study, 'Economic Contribution of Cruise Tourism to the Destination Economies.'

In that study, along with the 2009 and 2012 versions, San Juan's average expenditure per passenger was $102.53, which directly benefited numerous industries through purchases of goods and services, including food and beverages at restaurants and bars, shore excursions, ground transportation and retail purchases. And crew spending averaged $136.76 per person.

By these numbers, San Juan's growth in 2013, after hosting the FCCA Cruise Conference & Trade Show, generated an extra $13.7m in passenger spending, $3.1m in crew spending, along with an estimated $3.4m in cruise line expenditures and $7.2m in employment wages—a total of an additional $27.4m, not including indirect contributions such as supplies purchased by tour operators, restaurants and port authorities, or spending from cruisers who return as stay-over visitors.

FCCA noted that if its member line passenger arrivals increase the same 10% in 2018, this would lead to approximately 1.78m passengers and estimated increases of $16.1m in passenger spending, $3.7m in crew spending, $3.9m in cruise line spending and $8.4m in employment wages—a total of $32.1m more than in 2015.