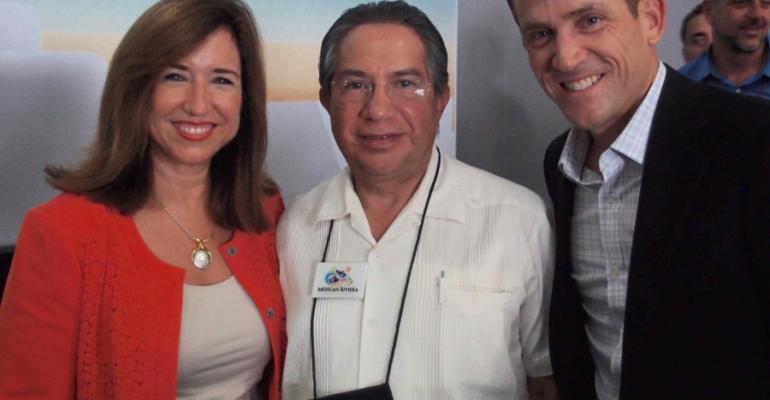 It was music to one Mexico port's ears when Christine Duffy, president of Carnival Cruise Line, said passengers rate Puerto Vallarta among the Top 5 places Fun Ships visit in the world.

Guest satisfaction ratings correlate with calls, Duffy said during a Mexico session at the Florida-Caribbean Cruise Association conference in Cozumel.

Concerning Mexico in general, the Carnival president said there's opportunity to improve: 'Only once, in 2011, have our customers ranked the average of the Mexican ports better than the average of ports worldwide.'

Costa Maya, Duffy noted, will be opening its Lost Mayan Kingdom water park this season, which presents such an opportunity.

Besides pleasing passengers, Puerto Vallarta learned from the situation in Mazatlán a few years ago when the cruise lines pulled out after concerns about security.

Mazatlán, Sinaloa state and federal officials acted to address those issues—boosting the security presence in tourist areas and stepping up communications, among other efforts. So after dropping to practically zero cruise ship visits, Mazatlán has rebounded and now projects 94 calls and more than 300,000 passengers in 2016.

A leading local tour operator on the FCCA panel said Mazatlán didn't know how important the cruise ships were 'until we lost them. It took us a week. It was like a ghost town.' Hoteliers were hurt, too, since a percentage of cruisers return for stay-over trips.

'Everyone knows a cruise is like a fam trip to a destination,' the tour operator said.

According to FCCA president Michele Paige, 25% to 80% of cruisers return to a destination they've visited by ship.

So, after Mazatlán's experience, some months ago when a security issue flared up along the border of Puerto Vallarta's Jalisco state and Michoacán, local, state and federal authorities sprang into action, communicating regularly with cruise lines and the FCCA to provide information and get ahead of the media reports.