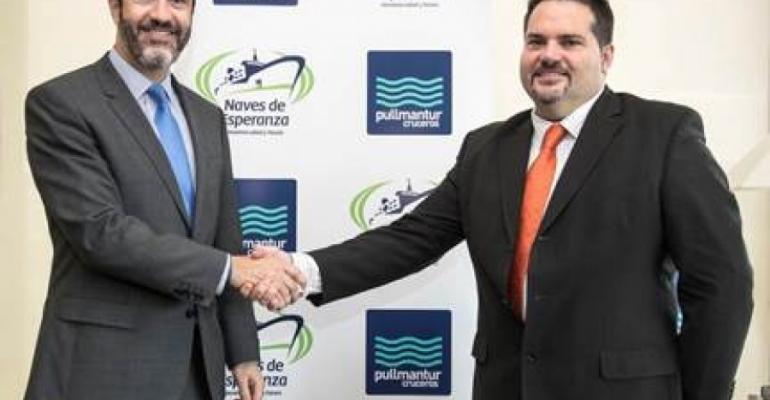 Pullmantur will launch a series of activities to raise awareness about the work of Mercy Ships, while promoting volunteering and charitable giving within the company and among its travelers, suppliers and the general public.

This is the first cruise line partnership to spring from Cruise Lines International Association's endorsement of Mercy Ships as its Charity of Choice, noted Russ Holmes, director of development/corporate relations for Mercy Ships.

The vessel Africa Mercy has five operating theaters, an 82-bed hospital, X-ray, CAT scan, medical laboratory and remote diagnostic equipment. This teaching hospital ship, with a volunteer crew of 400 from more than 40 nations, docks for 10 months each year in one of the world’s neediest countries, where it provides free surgeries. At the same time Mercy Ships personnel work with the ministry of health in each nation to improve hospital facilities and provide training for medical staff and hospital administration.

Specifics of the Pullmantur Cruises partnership include the promotion of Mercy Ships' work on websites and social media, a Mercy Ships information area to be installed on each ship and a charity walk around the deck on one sailing day each cruise, where participants will wear a branded T-shirt to raise awareness of the charity's work. A video explaining the need to improve healthcare in developing nations and what Mercy Ships is doing about it will be aired on television programming.

Pullmantur Cruises staff are already being encouraged to help by volunteering and head office staff in Madrid held a tapas event a few weeks ago to raise awareness and collect money to support Mercy Ships.

The partnership is especially significant for Pullmantur, Vilches said, because 'it brings together two aspects that are very important to us as an organization: the sea and solidarity.'

Vilches added: 'We want to put all our resources behind the work of Mercy Ships and help them to increase their capacity to provide healthcare for some of the world’s neediest people who would have no hope without their help.'

Menzies of Mercy Ships Spain noted that in the face of so much need, the organization has begun an ambitious project to more than double its capacity. In just three years Mercy Ships aims to double its volunteers, donors and corporate sponsors.

'I believe this agreement with Pullmantur Cruises will prove to be very valuable to the organization,' Menzies continued, 'and I hope that other corporations will follow their example, helping us to provide help for sick and disabled people in some of the world’s neediest countries, where they often have no other hope of having their health restored.'