Quantum floats out with giant pink polar bear up top 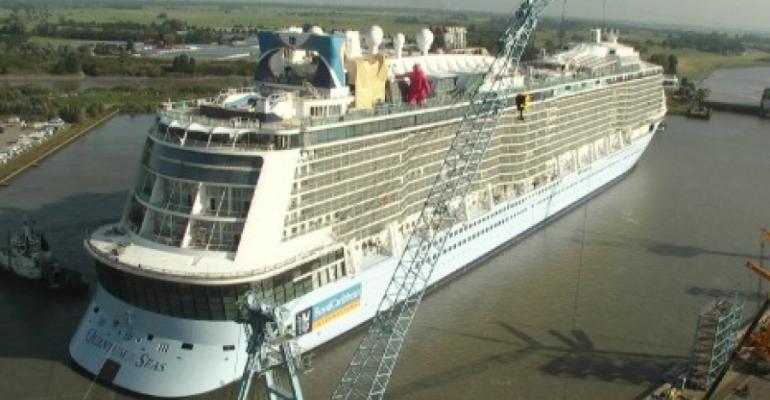 Quantum of the Seas has been floated out from Meyer Werft's covered building dock II. And crazy as it sounds, a 30-foot magenta polar bear is atop the vessel.

The bear, a sculpture created by Denver-based artist Lawrence Argent, is the first glimpse of the 2,980-piece, $5.2m art collection themed 'What Makes Life Worth Living' that has been curated for Quantum of the Seas by International Corporate Art.

The bear, titled 'From Afar,' is comprised of 1,340 stainless steel triangles, weighs approximately eight tons and is intended to incite wonder among travelers, encouraging them to admire the bear from afar and interact with it close up.

Having a piece of art on a cruise ship will allow it to be seen by 'many, many, many, many people—that's an exhilarating experience for an artist,' Argent said.

Along with Quantum's float-out, a complex operation involving the positioning of the grand blocks of Royal Caribbean International sister vessel Anthem of the Seas took place.

These works commenced. Tuesday night, with Quantum of the Seas itself emerging early Wednesday. The ship can be seen al fresco on Meyer's webcam at www.meyerwerft.com.

The Quantum float-out and Anthem block positioning operations had been postponed from Friday by weather and were initially rescheduled to Tuesday afternoon.

Quantum's conveyance along the Ems River is expected in mid- or late September.