Quantum has 'blown away' Chinese agents, media on inaugural cruises 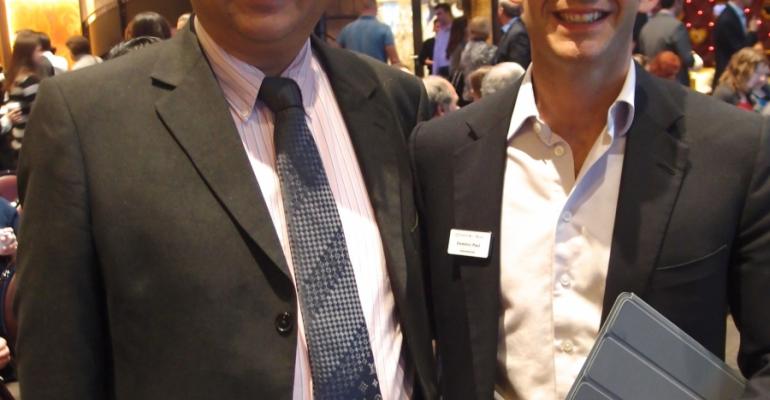 Zinan Liu, left, with Dominic Paul aboard Quantum of the Seas
From a booking perspective, Quantum of the Seas is 'shaping up very nicely in China,' according to Royal Caribbean's international chief, svp Dominic Paul. Plus, the enthusiastic reaction from about 200 Chinese travel agents and media aboard inaugural cruises from Bayonne, N.J.'s Cape Liberty in recent days has been encouraging.

'They've been blown away by the ship,' Paul said. 'Sales for 2015 are good, and now we're even more confident. We think Quantum will be enormously successful in the market.'

The Chinese trade started base-loading sales a few months ago, and there has been a strong communication program in China. But now that they've had the opportunity to see it, Paul said the ship has "completely exceeded their expectations.'

Quantum will expand the spectrum of the customer base in China, Zinan Liu, regional vp and md China for Royal Caribbean and chairman, CLIA North Asia, told Seatrade Insider on board the ship. Previously, younger customers might have viewed cruising as too traditional. In fact, it's turning out that the demographic in China skews younger for Royal Caribbean than elsewhere.

Liu said cruises achieve very high satisfaction levels among Chinese cruisers, and Chinese see cruising as an aspirational, lifestyle, experiential thing—like fine wine. They travel as multigenerational families and with groups of friends. And they love the 'Western-ness' of cruising—especially they younger generation.

Quantum's 'Dynamic Dining' will be popular in China, Liu predicted. He compared all the different choices as akin to exploring the dining scene in New York City. What's more, 'opportunity and flexibility' are important to Chinese so the array of dining choices is suited to them.

And they are very IT-centric so the technology offer will be appealing, in Liu's view.

Some product adjustments are planned when Quantum repositions to its year-round base in Shanghai, including expanded retail offerings, luxury brands not seen at sea before and a larger footprint for the casino. But the ship won't require as many changes as people might think.

'The fundamental product is a premium, upscale product. The core product is fantastic for the Chinese market,' Paul said. Royal Caribbean ships have been sailing in China for six years 'so we have a good idea of what works and what doesn't.'

Liu reeled off a variety of reasons the Chinese government supports the cruise business. Feedback from consumers, media and travel agents is very positive. There's a socioeconomic impact including jobs, and the land values around cruise terminals are high. Plus, cruising brings prestige to cities like Tianjin that are getting greater international visibility.

Both Liu and Paul are scheduled to speak at Cruise Shipping Asia-Pacific in Hong Kong later this week.