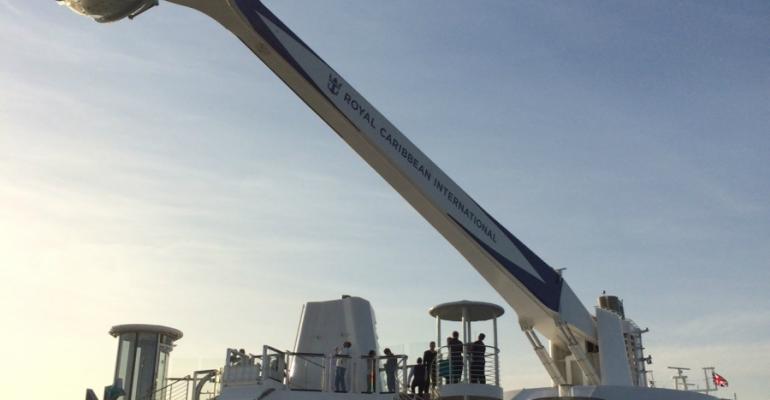 Three thousand plus travel agents, destination partners, suppliers, media and loyalty passengers from around the globe were among the first to experience Royal Caribbean International’s Quantum of the Seas this weekend on a two night shakedown cruise to nowhere.

So how did the first test drive go on what Royal is describing, as the ship that ‘changes everything’.

From conversations overheard in restaurants and bars, in elevators or whilst watching families enjoying the bumper cars in the SeaPlex indoor sports complex, the fact of the matter is, it went down a storm.

Whether it was first time cruisers, or those new to Royal Caribbean, or past passengers. Whether English or German guests or those from India or China or whether it was Royal employees, the ship appears to have been given an overwhelming thumbs up as the multitude of first-at-sea onboard experiences across the dining, entertainment, accommodations and activities were put to their paces.

With over 300 media onboard all wanting to post first-hand accounts, share images and send social messages, the ship’s wireless capabilities were fully tested on the first sailing and connectivity, particularly at sea, was an issue.

At one stage, there were 4,500 devices active across the ship, the company reported. Hardly surprising, with guests encouraged to make full use of the Royal iQ app to access a myriad of shipboard activities.

Richard Fain, Royal Caribbean’s chairman and ceo was quick to put it into perspective.

‘One of Quantum’s truly defining characteristics is the amount of bandwidth available onboard the ship. Thanks to our partnership with O3b Networks, Quantum will offer blazingly fast connectivity during her inaugural season from New York, however unfortunately that type of connectivity isn’t available yet in the UK,’ he remarked.

At a press briefing Fain, rather tongue in cheek added, ‘we did consider asking O3b to launch the satellite in time for this two day cruise but decided it was a lot to ask.’

However, he stressed the enhanced coverage will be available when sister ship, Anthem of the Seas, arrives in Southampton next spring for her summer homeport.

On Quantum’s November 18 sailing from homeport Bayonne, ‘85% have already generated their boarding documents online, uploaded their own ID photo and received digital boarding confirmation, she said, enabling them to go from cruise terminal and onto the ship within ten minutes of arriving at the port.

The facility for tracking luggage in real time on their smartphone and monitor its progress en route to the stateroom, whilst not available in Southampton this weekend, will be in service for the ships arrival Stateside, she confirmed.

Lutoff-Perlo said those that have checked in online are booking dining reservations, shorex etc in advance which is ‘a surprisingly high number for such new technology’.

Seatrade Insider caught up with some Royal Caribbean executives to ask them what in their opinion makes Quantum a game-changer?

First up, Juan Trescastro, vp port operation, monitoring the embarkation in Southampton,: ‘It has to be the technology, most of it behind the scenes and so easy to use.’ He singled out the new RFID wristbands which require only a simple tap to quickly navigate the ship, make onboard purchases, book a table reservation or shorex and serve as the room key,’ as setting Quantum apart.

Adam Sharp, manager port operations and guest port services EMEA, added, ‘For me it’s the 10 minute kerb to gangway guarantee and the new technology used for online check-in and baggage tracking, unseen in the industry till now, which is the key game changer from a port operations perspective.’

Fain said on the Southampton embark the average time achieved was seven minutes.

The chief singled out SeaPlex as his stand out space: ‘I knew a lot about this space prior to delivery but it wasn’t until I got onboard and saw it in action across multiple activities from the bumper cars to basketball and from roller disco to Xbox Live, that I realised just how good it is.’ He called it, ‘an extraordinary moment of excitement’.

For president and coo, Adam Goldstein, ‘it has to be Dynamic Dining’. He continued, ‘To change the iron-clad view that we have one large main restaurant seating 2,000 upwards people and to go to four complimentary restaurants: Chic, Silk, Grande and American Icon all with a more intimate setting and to be able to eat what you want and when you want it, is my WOW.’

Brian Abel, vp of food and beverage called the onboard technology fusing into the f&b side as ‘quite different’ than elsewhere across the fleet. ‘From guests being able to make a reservation pre-cruise, via an app or at one of numerous Royal iQ stations around the ship to the waiters taking table orders using a tablet which goes straight to the galley, enabling them to spend more time serving the guests, are why Quantum is a game-changer for me.’

On the marine side, Captain Srecko Ban’s game changing features are, the air lubrication system using bubbles to reduce drag, the newly designed podded propulsion systems, bow thrusters and fin stabilizer pockets,  ‘which are all helping to reduce resistance and increase fuel efficiency which is important to minimizing our environmental footprint.’

Whilst there were queues for the iFly sky diving experience throughout the cruise, and the majority of those that did try it were blown away, the North Star got the biggest like from those Seatrade Insider spoke to.

Capt Patrick Dahlgren, vp marine ops, called the North Star, rising more than 300 feet in the air and offering a bird’s eye view of the vessel and surrounding ocean ‘so cool’ and ‘probably the most talked about feature of the new vessel.’

Stuart Leven, md of RCI UK & Ireland agreed, ‘iconic features like this can change people’s opinion about cruising and pull in those who have not tried it before.’

Fain concluded, ‘It is more of an icon than we ever expected and something different everyone can enjoy.’

On the entertainment side, the cast of Mamma Mia got a standing ovation each night and the highly visual Starwater music and dance production, harnessing the power of Two70’s exclusive technical innovations with six large twisting RoboScreens offering visual displays that are integral to the live performances caused jaw-dropping reactions. Many went back a second time just to see it again as there was only so much one could take in on the first viewing.

By day, this aft lounge, located on Deck 5 with its vast floor to ceiling windows spanning 270 degrees across the back of Quantum providing a spectacular low-down view of the ocean was also a ‘hot’ spot.

Quantum of the Seas departed from the UK on Sunday evening with over 4,000 paying guests onboard headed for its first homeport and naming ceremony in Bayonne, US.