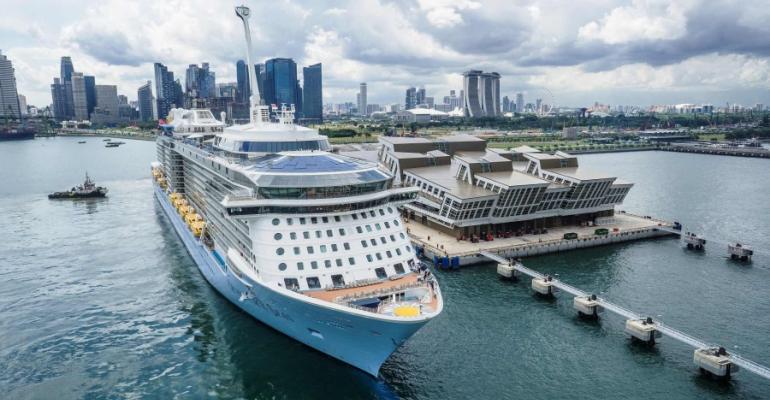 Wallem Ship Agency is the ship agent for the 168,666gt Royal Caribbean International vessel and provided all port husbandry services, from pre-planning of berthing arrangements through port operations and formalities such as immigration clearance.

Quantum of the Seas arrived in Singapore as part of its 53-night 'global odyssey' repositioning voyage to its new year-round homeport, Shanghai (Baoshan).

'Pre-planning this visit was the most important aspect of our service,' said Frankie Tan, director, Wallem Shipping Singapore, 'and the berthing plan was a priority because of the size of the vessel.'

Tan said Wallem coordinated with Royal Caribbean and the terminal to be '110% sure that on berthing the passenger bridges match between the ship and the terminal, and all the necessary doors can operate for loading and discharging the baggage, provisions, garbage and so on.'

Apart from the berthing plan, all other arrangements were the same as for other cruise ships visiting Singapore, Tan added. That includes baggage handling on and off the ship, garbage removal, loading of stores and provisions, the porters and stevedores, and more.

The Wallem Singapore team is well-versed in the needs of the cruise lines visiting the Lion City, hosting 159 calls in the 2014/15 season.

Quantum of the Seas is overnighting at Singapore and will disembark passengers on Friday before welcoming another group in the afternoon for a three-night round-trip to Malaysia's Port Klang.

This will be followed by a nine-night cruise on June 15 from Singapore to Shanghai, calling at Ho Chi Minh City, Hong Kong and Xiamen.

In Hong Kong on June 20 Wallem will again handle Quantum of the Seas.