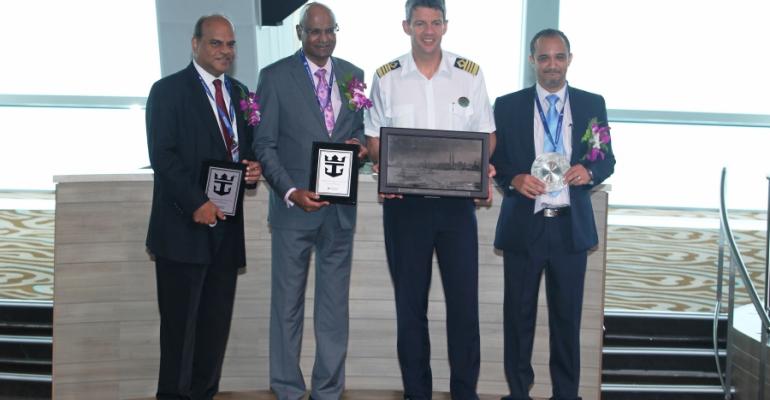 Quantum of the Seas received an official welcome Saturday on its first call at Malaysia's Port Klang. The 168,666gt Royal Caribbean International cruise ship is the largest ever to call at any Malaysian port and with the highest number of passengers on board—nearly 4,300 from around the world.

Quantum of the Seas visited during a three-night round-trip from Singapore.

Plaques were exchanged between Capt. Srecko 'Felix' Ban of Quantum of the Seas with the Dato’ Capt. David Padman, gm of Port Klang Authority, and Daniel Ebinesan, financial director of Boustead Cruise Centre, in the presence of local government officials, media, and business and trade partners.

The Quantum-class innovations in entertainment, technology and culinary areas will 'unleash a new wave of excitement and cruise boom among Malaysian vacationers,' Yap said. She added that deploying Asia's largest cruise ship 'underscores our heightened confidence in the region’s potential and deepened commitment to growing our regional presence.'

The mini-cruise from Singapore was part of Quantum of the Seas' 53-night repositioning voyage from Bayonne, New Jersey's Cape Liberty to Shanghai (Baoshan), where the ship will be based year-round. The final segment of that voyage departs Singapore June 15, calling at Ho Chi Minh City, Hong Kong and Xiamen en route to Shanghai.