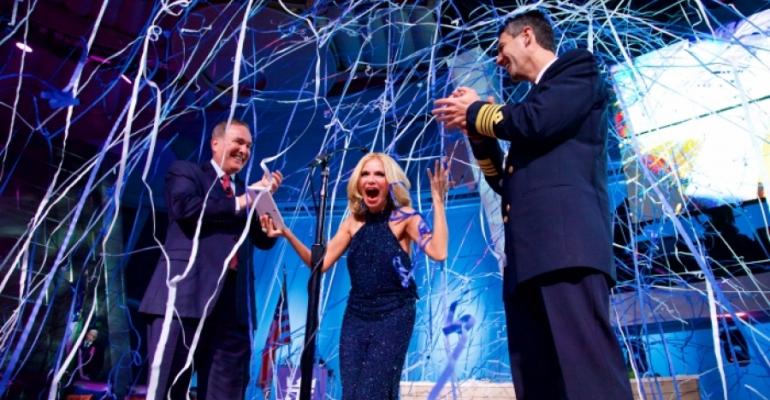 Godmother Kristin Chenoweth reacts to the Champagne smash. Applauding her are Richard Fain, at left, and Capt. Felix Ban

Quantum of the Seas, touted as the first 'smart' ship, is all about technology. That was harnessed to pack an emotional punch at the ship's naming when earth harp inventor William Close and singer/actress Kristin Chenoweth, the ship's godmother, teamed on a moving rendition of 'Somewhere Over the Rainbow' from different venues on board.

Close was in the Royal Theatre and Chenoweth in Two70°, where the audiences gave standing ovations.

Then Royal Caribbean chairman and ceo Richard Fain and Capt. Srecko (Felix) Ban joined Chenoweth on the Two70° stage where a Spiderman-like acrobat in black descended from the ceiling to hand Chenoweth a tablet. She used that to signal the North Star viewing capsule to rise, releasing a giant bottle of Perrier-Jouët Champagne along a zipline to smash against the ship's name.

Fain had called Quantum of the Seas' inaugural 'an important moment in the history of Royal Caribbean.' He related how, in December 2009, the company began to envision a ship that would follow two notable classes—Oasis and Solstice. 'But how could we possibly top Oasis and Solstice?' he said.

The idea that the company wanted to create something 'fundamentally different' was reflected in the names that were debated for the new class—among them, Project Darwin and Project Life. In the end, 'we wimped out and it was Project Sunshine—who doesn't like sunshine?' Fain quipped. But when it came to a name for the ship itself, everyone fell silent in agreement over Quantum, because it's always tied to 'leap' and that's what this ship is—a quantum leap, he added.

As in the past, Royal Caribbean began with the idea of making something that was one-third traditional, one-third evolutionary and one-third revolutionary—'although perhaps we went a little heavy on the revolutionary,' Fain joked.

'We saw that people's tastes are changing. Our first goal was to wow our guests.' The second goal was to make Quantum a 'before and after' ship, meaning that hopefully someday soon people will reflect on what cruising was like 'before Quantum,' which changed everything.

Fain singled out for highest praise evp maritime Harri Kulovaara, calling him a genius and a dreamer. He acknowledged Kelly Gonzalez for leading the team that designed the interiors, and Bernard Meyer whose seventh-generation, family-owned Meyer Werft built its biggest and most complex cruise ship in Quantum. He praised chief information officer Bill Martin and his team for their work to create the first 'smart' ship, Royal Caribbean president and chief operating officer Adam Goldstein for guiding Quantum's concept and development from the beginning, and evp operations Lisa Lutoff-Perlo for her passion and commitment.

Fain said of everything on Quantum, 'the most important feature is the crew.'

The sensual drumming of Sonic Odyssey followed by the Pipes & Drums of the Emerald Society of the New York City Police Department got the festivities off to a rousing start, and Las Vegas star Clint Holmes sang 'America the Beautiful.' A fun-filled video captured highlights of the ship, from the sky diving simulator to bumper cars to the North Star, as experienced by the Grubb family via the Make-A-Wish Foundation.

Guests watched the naming ceremony, emceed by Weir, from various lounges on board, with the 'VIP of VIPs' party—Kulovaara, Goldstein and others—at front in Two70°. Among those in the Royal Theatre were captains from across the Royal Caribbean fleet.

Quantum's festivities took place late Friday afternoon when the ship was alongside at its homeport, Bayonne, N.J.'s Cape Liberty.