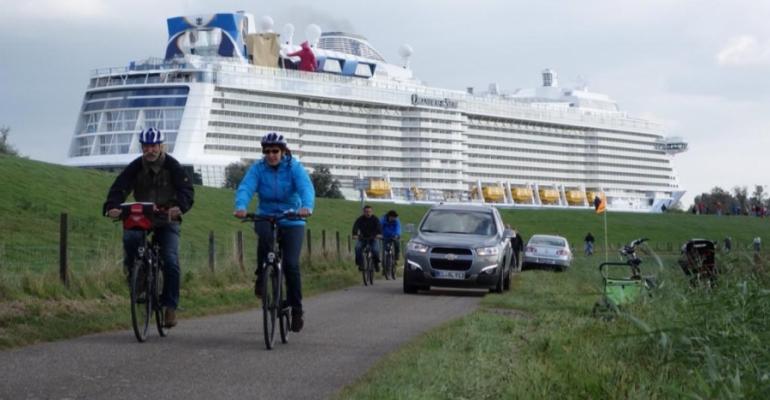 Overnight Quantum of the Seas safely completed its conveyance through the north German countryside from Meyer Werft's harbor in Papenburg to the North Sea, a shipyard spokesman confirmed. Some technical adjustments are underway before the vessel is expected to dock at Eemshaven in the Netherlands on Wednesday morning, he said.

In Eemshaven, the ship will begin a series of tests and, as earlier reported, later will moor for several days at Bremerhaven's Columbus Cruise Center before sea trials begin.

While the conveyance of ships is not new for Meyer Werft—the yard has been doing this since 1795—there are plenty of challenges to a successful conveyance, and Quantum of the Seas has been especially demanding due to its size. At 348 meters/1,141.73 feet, with a beam of 41.4 meters/135.8 feet, this 167,800gt ship is the largest to make the Ems transit.

Power lines needed to be rerouted, and some bridges along the river had to be lifted out of the way with a crane to allow the ship to pass, including one that is used by one of the main railways into Holland, according to Royal Caribbean International's Patrik Dahlgren, vp marine operations.

Quantum was conveyed backwards, as most ships are, because it's usually easier and safer to maneuver them in reverse along the 26-mile route.

As always, masses of onlookers flocked to see the curious sight of a giant vessel appearing to slice through the pastures and farmlands of Lower Saxony.