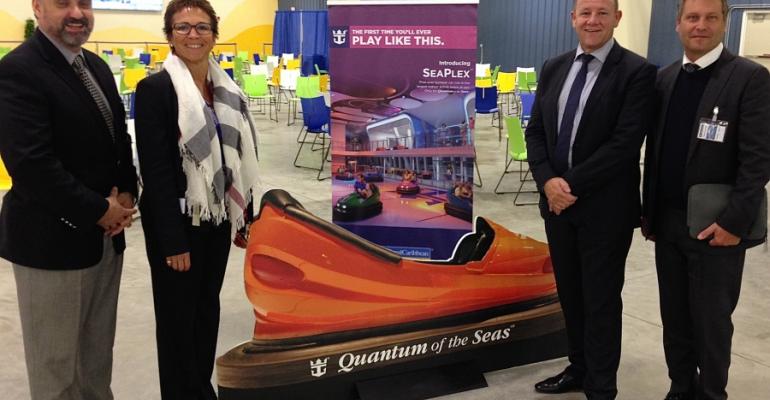 Ten minutes from sidewalk to ship is the goal of 'smart' check-in for Quantum of the Seas. It's gone even faster than that during the series of inaugural two-night sailings from Bayonne, N.J.'s new Cape Liberty Cruise Terminal.

'This is a game-changer,' said Celeste Gladstone, vp client relationships, Intercruises Shoreside & Port Services, who has been at the terminal during these inaugurals with Intercruises md Mark Robinson and Enric Noguer, newly appointed president, North America & Caribbean. Intercruises staff underwent extensive training to ensure a smooth implementation of the new system.

When Seatrade Insider arrived by a motorcoach airport transfer at about 2 p.m. Friday, the check-in was fast, friendly and efficient. During what would normally be a crunch time for cruise embarkation, the terminal seemed almost deserted. Quantum of the Seas was embarking 3,400 people—fewer than the ship's normal capacity—because it was a short inaugural sailing for the trade.

That meant less luggage, and the travel agents, media and other industry professionals were savvy to smart check-in, so the conditions were prime for a smooth operation. Even so, glitches could be expected with a radically different system, yet things seemed to flow flawlessly.

Royal Caribbean's new Cape Liberty terminal, just completed for Quantum of the Seas, is designed for maximum Oasis-class capacity, Trescastro said, adding that Oasis 3 and any further ships in the series will have retractable stacks to fit under the Verrazano-Narrows Bridge. He predicted Oasis 'will get here eventually' so the facility was planned to handle the world's largest cruise ship.

'We took everything we knew and put it into this,' Trescastro said.

That the terminal was ready is remarkable. 'We were parking cars here six months ago,' he said of the spot the terminal occupies. 'Working with our port authority partners and others, we got it done.'

The terminal has 125,000 square feet of check-in, customs/immigration and luggage processing space. There are 36 counters for traditional check-in if needed. The ground transportation area includes two lanes for private vehicle drop-off and pick-up, 17 dedicated bus slots and valet and VIP surface parking.

Many passengers on Quantum's inaugural sailings have been using what Royal Caribbean dubbed 'smart' check-in and completing documentation online at home, uploading their identification photo and saving the boarding pass using a mobile app or printing it. Passengers also pre-select a half-hour arrival appointment window, which helps eliminate any bottlenecks at embarkation.

In the terminal, Intercruises personnel use hand-held devices that read the boarding pass bar code and the passport. They also ask the required health screening questions. Passengers who download an app can track the progress of their luggage to their stateroom via an RFID tag that's added when they arrive at the curb.

Then cruisers go through security screening and proceed right on board. Images are projected from the ceiling onto the terminal's polished concrete floor. Gladstone called this the 'happy path' to get to the ship.

The terminal has stackable chairs that are put out randomly, 'just in case' needed, Trescastro said. Friday afternoon, at least, nobody was sitting or waiting anywhere.

The pair of FMT passenger boarding bridges are the largest pivoting gangways in the world, according to Trescastro. They have extra-wide tunnels and provide a dual interface to the ship.

Intercruises staff trained on a Royal Caribbean e-learning program and in recent weeks have toured the terminal facilities. Prior to Quantum's arrival last week, Royal Caribbean hosted a kick-off party.

Lars Ljoen, vp cruise services/ro-ro services for Ceres Terminals, which operates the terminal, recalled when Royal Caribbean first looked at Bayonne, in 2003. He was Royal Caribbean's director for nautical and port operations when the company was seeking an alternative to the New York City Passenger Ship Terminal, which had not then been updated for the next-generation cruise ships.

As Ljoen tells it, he 'grabbed (John) Tercek (vp commercial development for Royal Caribbean), and we were over here. A couple weeks later we had (Royal Caribbean president) Adam (Goldstein) here, and the rest is history.'