Quantum's Two70°—called coolest, most challenging and more costly than Song of Norway 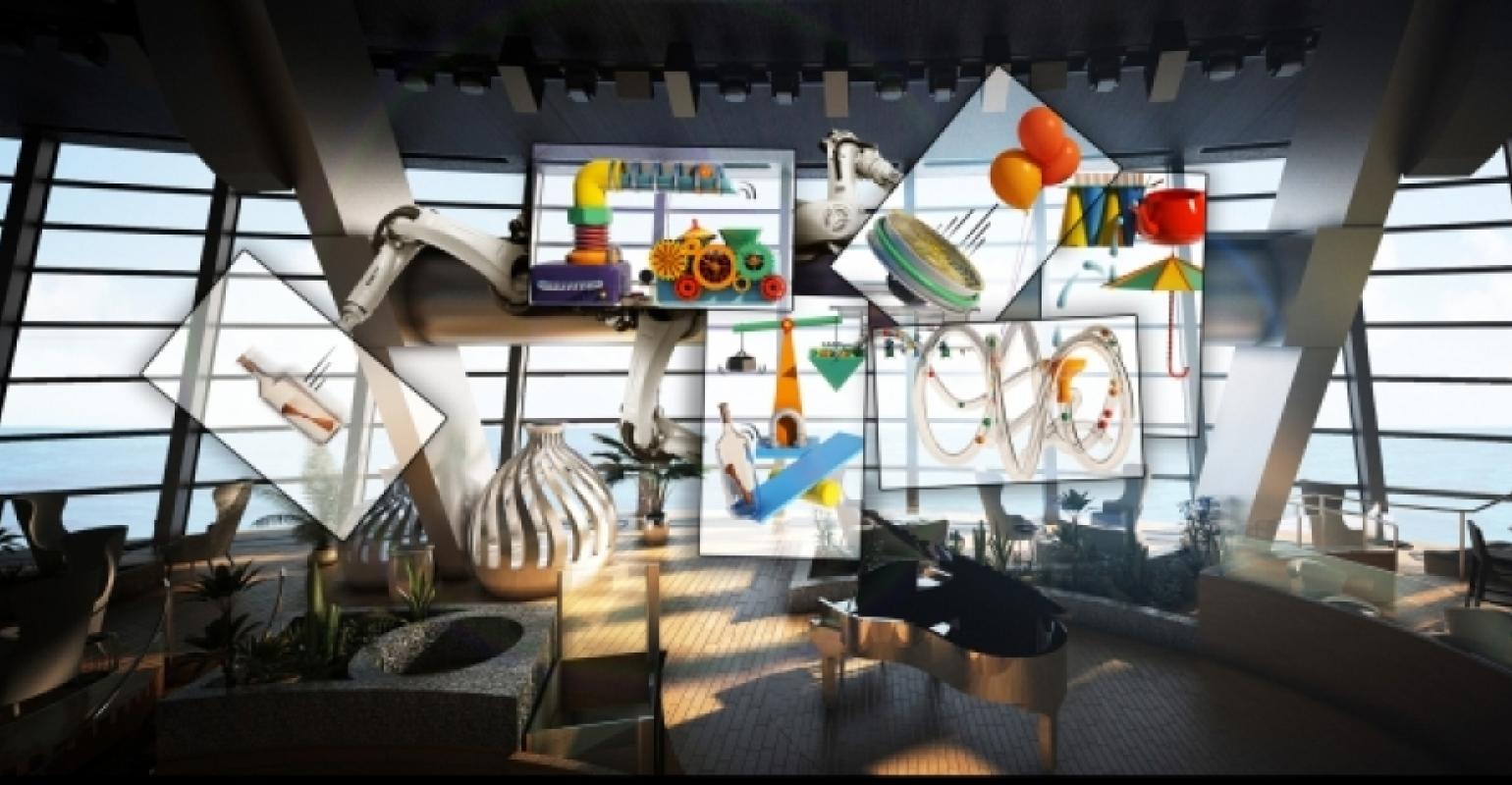 RoboScreens will stage what Richard Fain described as 'jaw-droppingly exciting' vignettes
Royal Caribbean entertainment vp Nick Weir calls it the coolest room at sea. For evp maritime Harri Kulovaara, it has been the most difficult design of his career. And chairman and ceo Richard Fain told Seatrade Insider Quantum of the Seas' innovative Two70°—the enormous aft lounge with 270-degree ocean views that mingles robotics and super-high-definition projections with human aerial acrobats— is the most expensive room Royal Caribbean has ever built. It was, in fact, more costly than the company's first cruise ship, the $13.5m Song of Norway.

'This is the most complex robotics project on the planet right now,' asserted Andy Flessas, president of Robotic Arts, who designed how the robots move with the music and interact with live performers.

The RoboScreens are six LED screens attached to ABB robotic arms, all mounted on a movable gantry. This is lowered from the ceiling into a play position where the screens move in many directions and can be layered to create a 3-D effect.

The RoboScreens can show vignettes like 'Dance in a Box,' which melds the movements of a ballet and a hip-hop dancer in an interactive, mind-mending way. Or the screens can zoom in on each musician in a band at once, and if a soloist steps forward, the RoboScreens will give that a 3-D expression, Weir said.

Fain compared the RoboScreen illusions to other iconic gravity-defying feats in entertainment, such as the astronaut jogging in the artificial gravity zone of the space capsule's spinning sphere in '2001: A Space Odyssey' and Fred Astaire dancing on the ceiling in 'Royal Wedding.' The technology will facilitate vignettes and shows that Fain touted as 'jaw-dropping exciting.'

'This room is about extreme offerings. It will push the barge out,' Weir told media and top North American travel retailers during a Two70° preview at Meyer Werft this week where Fain, Kulovaara and Lisa Lutoff-Perlo, evp operations for Royal Caribbean, emerged for the presentation from beneath the lounge on a lift. In addition to the stage lifts and fly positions from the ceiling, there are three action lifts around the room that can propel entertainers at high speed.

It has seating for 500 people and double-deck-high walls of glass. In front of those glass walls, screens can be lowered to show super-high-definition images from 18 8K projectors. This makes a whopping eight times sharper image than a 1080p high-definition television, according to Royal Caribbean's Bill Martin, vp and chief information officer.

For ship mastermind Kulovaara, Two70° was the most difficult room he's ever been a part of designing. It alone took longer than a year of work and entailed redesigning the entire ship, making fundamental changes to Quantum's lines, adding 20 centimeters to its width and reinforcing it with an additional 2,000 tons of steel.

'Quite a few times I was worried it was going to work ... Today we are super-confident,' he told Seatrade Insider. 'Nothing great comes without a little pain.'

Because a vast part of the outer wall is glass, all the structural support comes from the top of the lounge via columns cantilevered from a steel spine. Moreover, a room with so much glass, delicate robotics and other costly equipment sits atop 40MW of power from the ship's propulsion pods directly below so extra work was needed to insulate from noise and vibration.

Also, because of the glass walls, the 'backstage' is beneath the stage. 'There is a big world under there,' as Kulovaara put it.

'Two70° has so many facets to it that it almost seems to be the hub of the ship,' said CruiseOne independent vacation specialist Michele Duquaine of Slinger, Wis. 'Everyone will go there ... I think it will be the most popular room on the ship.'