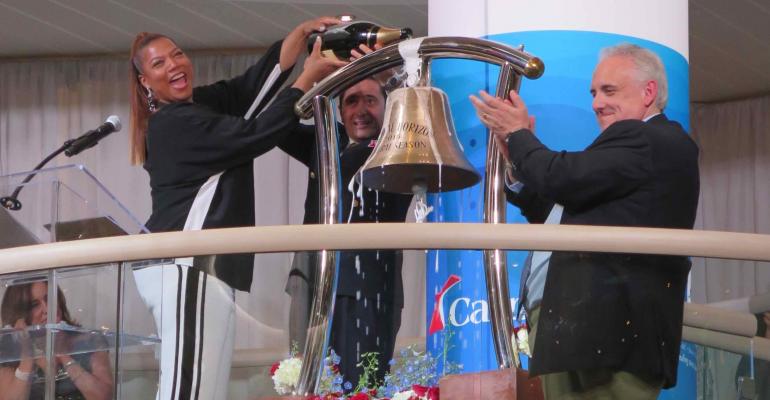 The Grammy Award-winning singer Queen Latifah officially named the ship then went on to win a Lip Sync Battle with a showstopping 'It's Raining Men.'

'I've been a Queen for a long while but I never expected to be asked to serve as the godmother to a cruise ship. It's one of the coolest things I've ever been a part of,' Latifah told the crowd from a platform in Carnival Horizon's multi-story atrium.

'I'm all about unity and bringing people together, and my experiences today reinforced that,' Latifah said, referring to her time on the ship and seeing the diversity of Carnival Horizon's crew, who hail from more than 50 nations.

The ceremony highlighted St. Jude Children’s Research Hospital, supported by Carnival Cruise Line to the tune of $16m so far and by Latifah herself. The monumental 'Dreamscape' installation in Carnival Horizon's atrium is decorated with the art of 33 St. Jude patients. Some were on hand for the naming with their families.

Then everyone adjourned to the ship's Liquid Lounge for a featured event of the naming: Lip Sync Battle Horizon, with Queen Latifah facing Jake Elliott, kicker for the Super Bowl champion Philadelphia Eagles and another St. Jude backer.

But first the crowd got a big surprise when Carnival Corp. & plc CEO Arnold Donald and Carnival Cruise Line president Christine Duffy took the stage, enthusiastically dancing and lip syncing to The Black Eyed Peas' 'I Got a Feeling (Tonight's Gonna Be a Good Night).'

'They say fun starts at the top,' the master of ceremonies quipped.

Then Elliott, in a huge blonde wig, wowed the crowd with Whitesnake's 'Here I Go Again.' But the Lip Sync champion was Latifah who, performing The Weather Girls' 'It's Raining Men'—backed up by beefcake dancers who stripped off their raincoats down to red boxer shorts—'totally rocked the house,' as the emcee put it.