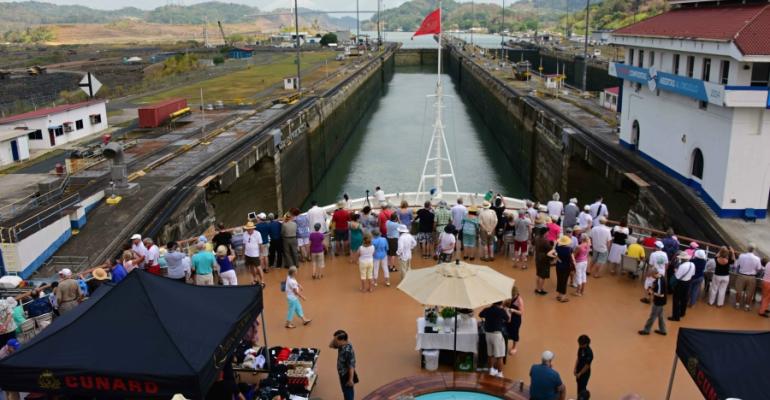 Cunard’s Queen Victoria, currently on a 103-night world voyage to the Americas, Australia and the Pacific Islands, transitted the Panama Canal, Wednesday.

Pictured, is the vessel at Pedro Miguel Locks, taken by professional photographer Jim Malcolm OBE,  who is currently in Panama on an assignment for Seatrade shooting a collection of maritime-related images for the next edition of the Panama Maritime Review 2015/16, published by Seatrade in conjunction with the Panama Canal Authority and Panama Maritime Authority.

Malcolm, a former British diplomat who spent 29 years in eight foreign posts around the world, including British Ambassador to Panama,  joined the ship at 5am yesterday on the Pacific side and spent ten hours during the transit taking images from various vantage spots around the vessel, including the navigation bridge where he met with Commodore Christopher Rynd, master of Queen Victoria.

90,049gt Queen Victoria, no stranger to transitting the Panama Canal, is one of the largest vessels able to undertake the passage.

Today, the ship is en-route for next stop Cartagena in Columbia and then the journey takes her onwards to Grand Cayman, along the east coast of the US before crossing the Atlantic from New York and returning to Southampton on May 3.