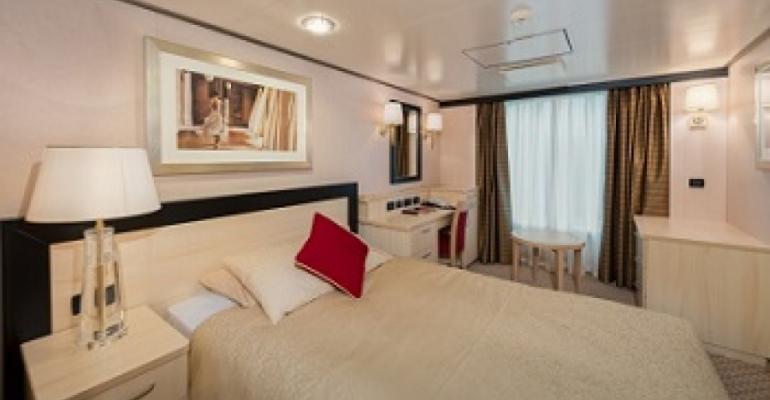 One of nine new solo accommodations

Queen Victoria is several days into its world cruise following a 20-day refurbishment at Blohm+Voss in Hamburg that added nine solo staterooms, fresh carpets and beds, refurbished the Lido restaurant and improved outer decks—among other changes that first were made to Queen Elizabeth in 2014.

'We are delighted to incorporate their wish for more outdoor space with enhancements to the Upper Grill Terrace and additional areas for sunbathing. We also provided more single staterooms for our single travelers,' he said.

Queen Victoria embarked on its world cruise Thursday in Southampton.

World voyage passengers were welcomed with a flag-raising ceremony at the ship’s mast. This was to hoist the signature flag for the first time on board and, as is traditional, was performed by the youngest crew member, deck cadet Fraser Browne, 20.

The flag will be flown at landmarks across the world during all three of the Cunard fleet’s world voyages and will be auctioned at their conclusion with all proceeds going to The Prince’s Trust, the line's official charity.

Highlights of the refurbishment are here.