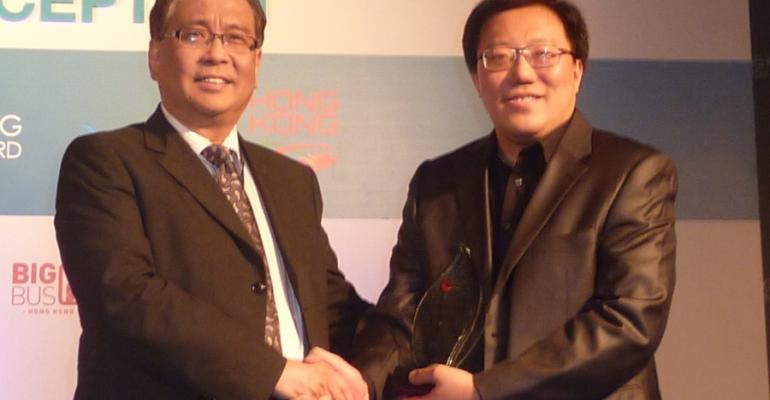 Celebrity Cruises' Kelvin Tan, commercial director, Asia Pacific, has been recognized by receiving the 2014 Rama Rebbapragada Award for Outstanding Contribution to the Cruise Industry in Asia. The award was presented during Cruise Shipping Asia-Pacific in Hong Kong.

Tan maintains a passionate belief in the potential of the Asian source markets and has enthusiastically promoted new ports and itineraries within the region, helping to establish Asia as an exciting new market within the industry. He was hired at Royal Caribbean by the late Rebbapragada, and worked with him for 13 years.

Liu called it ‘a great honor and a privilege to present the award to someone who leads a team for all commercial development including strategic planning, sales, marketing, harbour relations, deployment and port development.' Tan, he added, is part of a pioneering team that successfully drove the Royal Caribbean business into Asia. Among many milestones, he helped foster the cruise business in Asia and launched the company’s Singapore and Hong Kong season in 2007.

Liu noted Tan was a close friend and colleague of Rebbapragada's and, like him, Tan has passion and energy that have made a significant contribution to Asia’s position in the cruise business.

‘I am very honoured and humbled to receive the award, not just for myself but for the Asia cruise industry as a whole,' Tan said. 'Rama was my boss and my mentor. We shared a lot together, especially in the early phases when we were trying to bring our ships into Asia. Rama was definitely the visionary and I consider myself as his strategist.'

Tan added that over the span of almost 20 years he has witnessed Asia's cruise growth, 'and I am very happy that it is now at a stage when it is about to explode ... I hope I have played a small part in contributing to what it is now, and over the past 15 years.’

Prior to taking on the Celebrity role in October 2013, Tan had worked as a regional director for the brand’s parent company, Royal Caribbean Cruises Ltd.

Rebbapragada, a long-time Royal Caribbean executive with a legion of friends and associates throughout the business, was instrumental in creating awareness about the potential of the Asia-Pacific cruise market. He also served as founding chairman of the Asia Cruise Association, the precursor of CLIA Southeast Asia and CLIA North Asia.

The first recipient of the Rama Rebbapragada Award, in 2013, was Ong Huey Hong, director-cruising, Singapore Tourism Board.