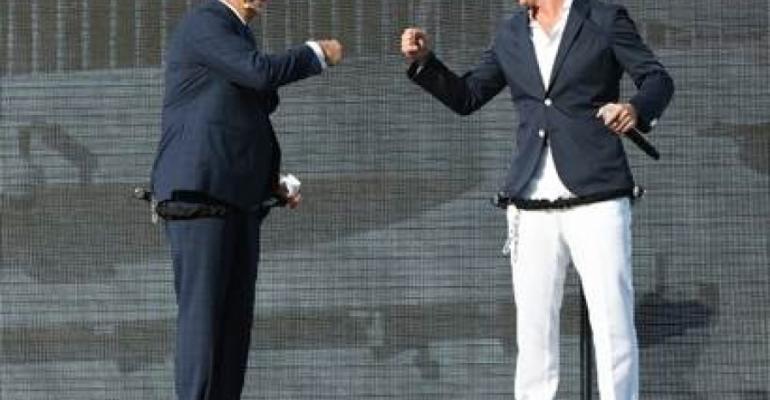 The festivities were packed with music, including exciting performances by 'After Midnight' and 'Million Dollar Quartet,' two of the headline shows on the new ship.

Norwegian Cruise Line Holdings ceo Frank Del Rio welcomed Pitbull to the stage, backed by huge white ESCAPE letters, and both men were elevated atop columns for the naming.

Del Rio praised Meyer Werft and managing partner Bernard Meyer for their 'outstanding partnership' in producing 'truly a magnificent ship that exceeds all my expectations of what a mega-shp should be.' He also thanked Michal Jackiewicz and Tillberg Design for their design work.

There was praise for PortMiami, too: 'This port is the envy of the world and so is Miami,' Del Rio said, thanking port director Juan Kuryla and his team.

It was the first ship NCLH has introduced with Del Rio as chief executive. Thomas Weigend of Meyer Werft told Seatrade Cruise News the shipyard was pleased to work with Del Rio and his team.

Weigend noted the 2017 Breakaway Plus ship for China will be the first from the Papenburg yard with Del Rio's 'signature' since Norwegian Escape was well along before he took over. The fact the 2017 vessel will be customized for Chinese travelers shows Meyer Werft's flexibility since production had started prior to that decision.

Del Rio is contributing significantly to shaping the concepts since he has traveled extensively in China and 'really has a good eye for the customers' needs,' Wiegend said.