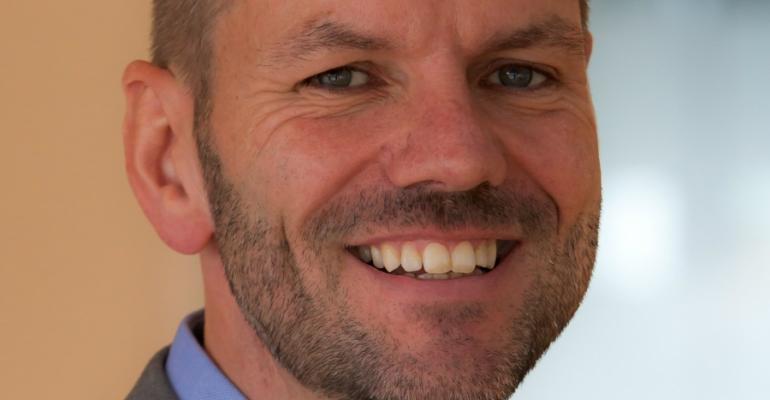 Leven: Quantum-class is the future of holidays

With Anthem of the Seas debuting in the UK next April, Royal Caribbean International invited 700 UK & Ireland travel agents onboard sister Quantum of the Seas shake-down cruise last weekend.

Keen to get their views post-cruise is Stuart Leven, md of Royal Caribbean International UK & Ireland, celebrating completing his first year with the brand.

‘Designed with audiences who’ve never cruised before in mind, Quantum-class is the future of holidays with its levels of technology such as robotic bartenders, smart check-in using RFID luggage tags and transformational high-speed internet speeds,’ Leven told Seatrade Insider.

To showcase Quantum-class and what it stands for, RCI placed full page adverts across in all the UK & Ireland national newspapers last weekend. More print media ads will appear this week, as well as promotions at several mainline stations across the UK.

For the print ads, the iconic North Star capsule is featured above the ocean with a simple message: 'This Changes Everything' with Royal’s contact details listed below.

With eight in ten of Royal’s UK & Ireland bookings coming via travel agents, ‘it’s important to engage and educate them and continue to talk to existing cruisers,’ commented Leven, which is why Royal is increasing its sales team across the country in advance of Anthem joining the refurbished Explorer of the Seas (replacing Independence of the Seas) out of Southampton next spring, as well as Mediterranean fly-cruises on Allure of the Seas from Barcelona.

These three ships will generate between 80-90% of Royal’s UK bookings next year, commented Leven. Anthem alone will carry up to 80,000 guests from UK & Ireland in its first season.

However, he pointed out, ‘it is equally important to engage with new audiences which is why a number of journalists from lifestyle titles were invited onboard Quantum’s shakedown, as well English super-vbloggers such as Alfie Deyes’ who has five million followers across multiple social media.’

When Oasis of the Seas called into Southampton recently on her way back to the US post drydocking, Leven invited 40 contributers to Mumsnet - the UK's largest website for parents – onboard. ‘None have ever been on a cruise ship so before we started the tour I asked who would consider a cruise and only two raised  their hand, he explained. ‘Just before they disembarked Leven asked the question again and 39 put their hands up.

‘We need to spread the word about cruising using every medium including Twitter, Facebook, Instagram, YouTube and more. ‘It’s not just about celebrity endorsements to sell the concept: yes it’s great to have Jamie Oliver’s restaurant onboard Quantum but it’s also about engaging with real people across all ages and to deliver a total redefinition of the concept of a Royal Caribbean holiday in the minds of ‘new to cruise’ consumers.

Three years ago a UK survey showed that on average a person visited 11 websites before deciding which holiday to choose. The same survey, done recently, showed that figure had risen to 31 sites now.

It’s a big ask but Leven is excited at the prospect. ‘The UK and Ireland is one of Royal’s strategic markets and I am very fortunate to be the guardian of that,’ commented the executive who chalked up a 20-year track record in airlines, travel agencies and hotels, prior to joining RCI.