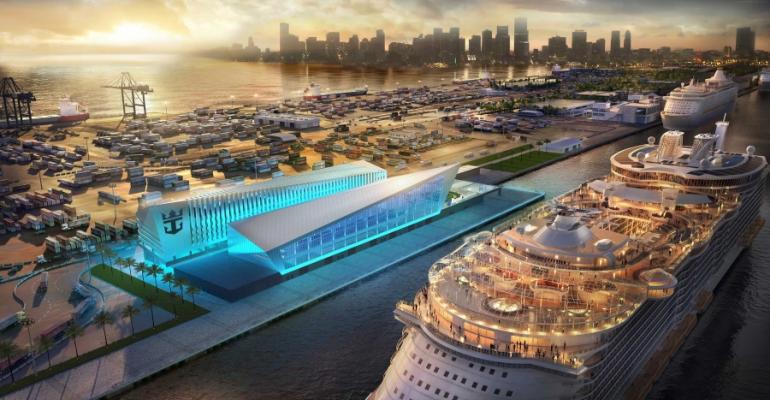 Royal Caribbean Cruises Ltd.'s plan to build and operate a dramatic new cruise terminal at PortMiami is moving forward. The cruise operator reached an agreement with Miami-Dade County to build the facility on county-leased land, and intends to homeport an Oasis-class ship, among others.

'This new terminal is a symbol of our commitment to Miami, the city where our company first started almost 50 years ago,' he said. In an event at the Perez Art Museum Tuesday night, Fain said Royal Caribbean would bring 'at least one' Oasis-class ship to the new terminal.

Miami-Dade County Mayor Carlos Gimenez joked that he would like two.

The mayor welcomed Royal Caribbean's expansion at the port 'and all the economic benefits that come along with it.' He said this public-private partnership will have an estimated economic impact of $500m, and generate approximately 4,000 jobs.

UK-based Broadway Malyan's Singapore office has been selected as the firm to design the new terminal in a global competition among five leading architectural firms.

Completion is planned for late 2018.

The new terminal isn't the only addition for Royal Caribbean. The company plans to build a 20,000-square-foot Innovation Lab at its corporate headquarters at the port to help generate its innovative vessels. This would be ready by the end of January 2017.

The terminal agreement will go before the Miami-Dade County Board of County Commissioners on July 6.

Commissioners approved a memorandum of understanding for the project in September last year. At the time, the value of the deal was estimated at $250m for the port.