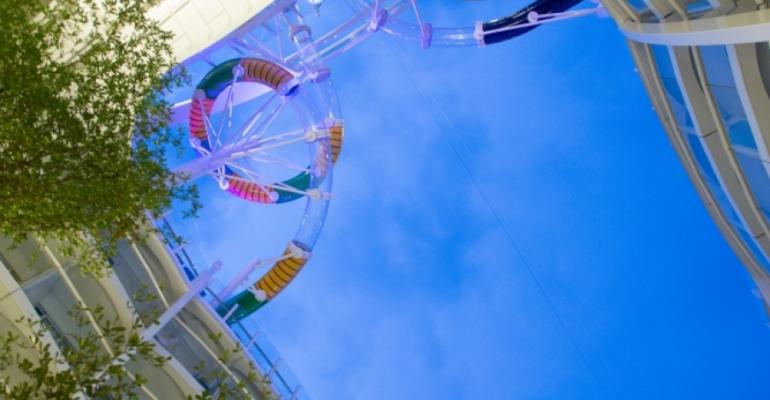 Sky's the limit for Oasis newbuilds with a fifth in the pipeline following the successful reception to Harmony of the Seas (pictured). Plus, Celebrity will get fourth and fifth Edge-class ships

Update adds analyst commentary on the price. Royal Caribbean Cruises Ltd. signed a memorandum of understanding with STX France to build a fifth Oasis-class ship for delivery in spring 2021, and two additional Edge-class ships for Celebrity Cruises that would arrive in autumn 2021 and autumn 2022.

'The response to the arrival of Harmony of the Seas is staggering, eliciting excitement from eager cruisers from markets on both sides of the Atlantic,' Royal Caribbean chairman and ceo Richard Fain said. 'And Edge class is one of the most highly anticipated new projects, following the high bar of modern luxury design set by its predecessor, the Solstice class.'

'The Oasis-class ships have delivered beyond expectations each time,' said Michael Bayley, president and ceo, Royal Caribbean International. 'Harmony of the Seas' warm reception is evidence that growing this class of ship will continue to drive exceptional performance for the brand.'

For her part, Celebrity president and ceo Lisa Lutoff-Perlo noted that while the first Edge-class vessel is still more than two years from delivery, 'there has been a tremendous amount of interest around the new standard of style' the ship will introduce.

'We are extremely pleased with the recent success of Harmony of the Seas and take great pride in our partnership with Royal Caribbean,' said Laurent Castaing, md of STX France. 'It is especially exciting to collaborate on such diverse projects from Oasis to Edge, both marvels in their own space.'

This order is contingent upon the completion of customary conditions, including documentation and financing. Final contracts are expected within the quarter.

This puts the per berth price in the range of the Oasis-class orders, UBS analyst Robin Farley said, adding that if euro pricing were the same, in dollar terms the same order on a cost per berth basis could be 8% to 15% lower today.