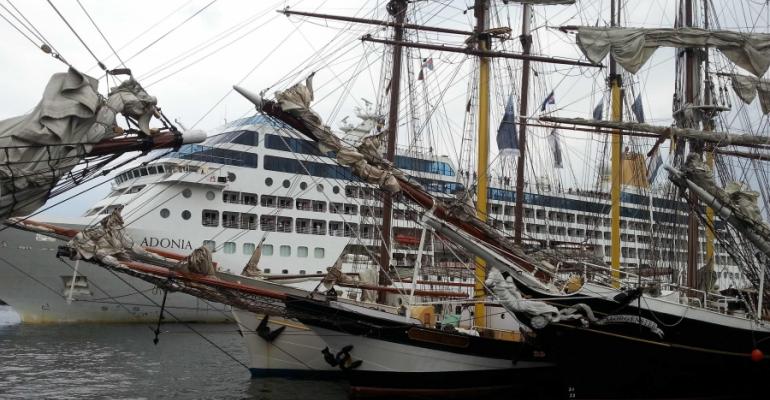 This year, a record 16 cruise ships berthed in the port of Kiel during the festival, which was held from June 21 to 29. Three - MSC Orchestra, Braemar and Adonia, along with a river cruise ship – joined the Windjammer Parade, which was held on Saturday June 28.

Led by the German Navy’s sail training ship Gorch Fock hundreds of ships transformed the Kiel Fiord into a sea of white sail for a few hours. Among the ships leading the different groups out were the four-masted Russian barque Kruzenshtern, the three-masted Polish full-rigger Dar Mlodziezy and Holland’s Gulden Leuww. The biggest windjammer in this year’s parade was the 106mtr long cruise ship Sea Cloud II.

P&O Cruises' Adonia, which arrived in Kiel on Friday afternoon from Southampton made her first visit to Kiel. She spent the day passing through the Kiel Canal and was welcomed on arrival in the Kiel Fiord by a flotilla of sailing ships.

During an on-board reception on Saturday morning, Claus welcomed Captain David Box to Kiel. The 30,000gt  ship, carrying 700 passengers, is on a 17-day Baltic cruise which will also take her to Tallinn, St Petersburg, Stockholm and Copenhagen.

The Kieler Woche is the world’s biggest sport sailing event. Every year more than 5,000 sailing enthusiasts spend the last full week in June at the Olympia Centre in Kiel-Schilksee, taking part in boat races ranging from single-handed dinghies to ocean-going yachts and in regatta races on the Kiel Fiord.

During the nine days of the Kieler Woche, the Schleswig-Holstein state capital of Kiel welcomes more than three million visitors to the city from all over the world. Every year more than 100,000 people watch the traditional parade of tall ships and old-time sailing vessels, the highlight of the week.