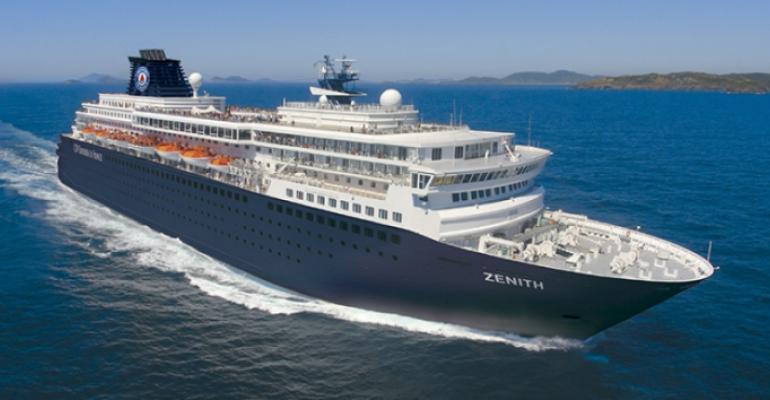 Pullmantur is under fire for damaging a Cayman Islands coral reef with a ship's anchor chain in an incident captured on video that has had hundreds of thousands of YouTube views.

However, Pullmantur Zenith was inside a government-designated anchorage when the incident occurred on Tuesday and 'there was no sign of negligence' by the captain or the harbor pilot, a Cayman Islands environmental official said.

An investigation is under way.

When diving instructor Scott Prodahl noticed Pullmantur Zenith was close to the reef, he took a camera to investigate. His five-minute, 31-second clip shows the anchor chain raking across the coral and clouding the water.

The Department of Environment's Scott Slaybaugh, deputy director, operations and enforcement, told The Cayman Reporter there was no wrongdoing by the crew of Pullmantur Zenith.

'The ship’s captain and the harbor pilot both acted in accordance with established procedure so there was no sign of negligence,' Slaybaugh said. He provided a Department of Environment software tracking graphic that showed the ship properly anchored inside the designated area.

Pullmantur's parent, Royal Caribbean Cruises Ltd., told Seatrade Cruise News in a statement that when Zenith arrived, it was directed to a designated anchorage position by the pilot.

'The spot where the ship dropped anchor was correct, located in the zone designated by the government for anchorage, and was not in any protected areas,' the statement said.

'This is a very unfortunate situation and we will work closely with Grand Cayman authorities to ensure this does not happen again,' Royal Caribbean added.

The statement said 'Royal Caribbean Cruises Ltd. understands the importance of protecting the marine environment and sustaining the well-being of the places we visit. Protecting the health and welfare of our oceans is always foremost in our minds.'

Grand Cayman remains one of the few major destinations where cruise ships are required to anchor.

The incident adds fuel to the controversy over cruise operations in the Cayman Islands, where the government in October approved the construction of a berthing facility in George Town.