Regent has free business class air for all in 2017-18, charts Northwest Passage 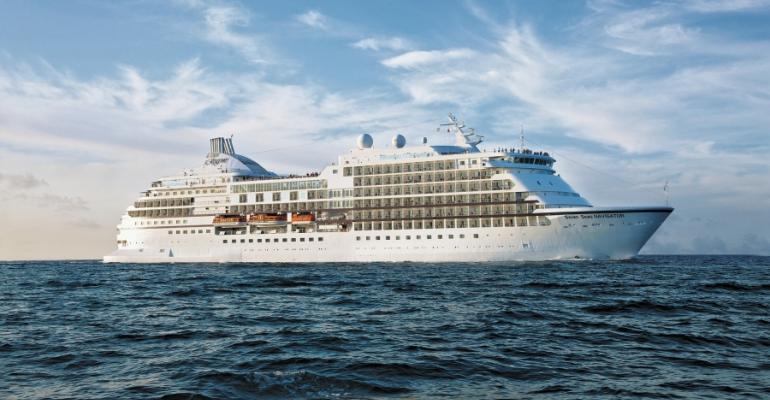 Seven Seas Navigator will chart the Northwest Passage on a 30-day transit from Seward, Alaska, to Montréal

Strongly upping the ante in the luxury sector, Regent Seven Seas Cruises is offering free intercontinental business class air to all passengers, on top of its other inclusives, and will chart the Northwest Passage in 2017. The news came as Regent rolled out its 2017-18 itineraries.

The business class air inclusion applies to all European, Asian and South American voyages where a passenger would need to travel on an intercontinental flight to embark or return home. The offer is available from 26 US and Canadian gateways and open to all passengers, regardless of suite category.

The rare Northwest Passage voyage, 30 nights, departs from Seward and traverses islands, fjords and passageways in Alaska, Canada and Greenland before sailing along the St. Lawrence River to Québec City and ending at Montréal. Seven Seas Navigator will operate the journey.

Regent's 2017-18 program also features additional departures from Los Angeles, increasing the number of cruises to the Hawaiian Islands, Mexican Riviera and Panama Canal. Seven Seas Navigator and Seven Seas Mariner will make a record eight crossings of the Canal as part of this voyage collection. Also of note, Seven Seas Explorer will embark on its inaugural season in Northern Europe, and Seven Seas Voyager will return to the Mediterranean for summer and fall.

The four-ship line will call at more than 335 ports in 98 countries. Thirty-five of the ports have never been visited by a Regent ship, with nearly one-third of those on the July 19, 2017 Northwest Passage voyage. They include Homer, Kodiak, Dutch Harbor, Nome, Alaska; Herschel Island, Yukon; Tuktoyaktuk; Northwest Territories; Cambridge Bay, Gjoa Haven, Nunavut; Upernavik and Uummannaq, Greenland; and Corner Brook, Newfoundland.

In April 2017 Seven Seas Explorer will sail a 10-night cruise in honor of Regent's 25th anniversary. The Barcelona-Venice voyage will feature a festive sail-away party, dinners hosted by the line's executives and a commemorative gift. After spending spring in the Mediterranean, the ship will head to the Baltic.

Seven Seas Mariner will spend the late spring and summer on seven- to 11-night journeys throughout Alaska and along the coast of British Columbia. The ship will explore Canada/New England in the fall before saiing down the Atlantic Coast on the 14-night 'Autumn Foliage' cruise from Montréal to Miami.

Following its 2017 world cruise, Seven Seas Navigator will embark on the Northwest Passage voyage. Another Arctic experience will be a 60-night journey starting in Montréal and returning to New York, visting dozens of ports throughout the North Atlantic and Europe along the way. They range from Le Havre (for Paris) to isolated Ísadörður in northwest Iceland. On the other side of the world, Seven Seas Navigator will explore Hawaii on an 18-night round-trip from Los Angeles.

After spending summer in Europe, Seven Seas Voyager visits ports in the Middle East and Asia. 'Towering Skylines,' a 12-night, late December voyage, includes Hong Kong, Shanghai, Nagasaki, Incheon (for Seoul) and Tianjin (Beijing). In March 2018, the ship heads Down Under and beyond, including an 18-night voyage to Auckland, Norfolk Island, Brisbane, Cairns and Bali.