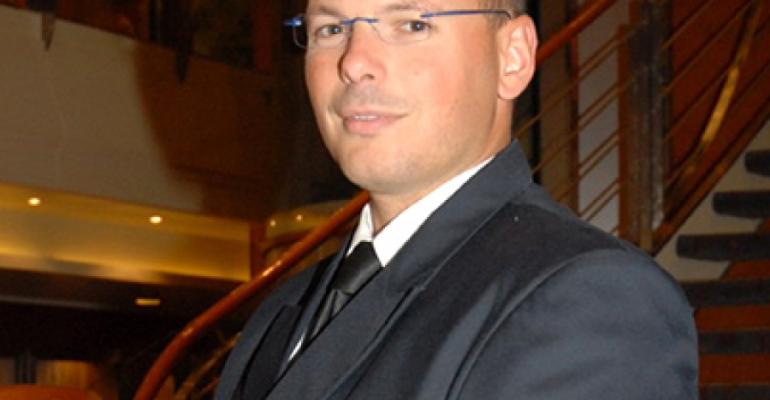 They will be joined by nearly 550 other staff and crew aboard the new ship.

Capt. De Lacombe brings more than 20 years of seafaring experience, and has served as master of both Seven Seas Mariner and Seven Seas Navigator since joining Regent in 2009. A native of Nantes, France, he has extensive leadership experience on ferries, container ships and at several cruise lines.

Griggi is a native of Genoa with more than 30 years of maritime engineering experience including in the Italian Coast Guard and aboard tugboats and supply vessels, as well as cruise ships. He joined Regent in 2012.

Galzy, responsible for overseeing the delivery of hotel and food & beverage services for Seven Seas Explorer, has served as a Regent gm for the past six years. After he joined the line in 1999, he first held roles including head waiter, head sommelier, provision master and food & beverage manager. Galzy is a graduate of the CAFA Sommelier Wine School in Angers, France, and worked at the Crabwall Manor Hotel & Spa in the UK for two years.

Chef Dumeylet will supervise all aspects of the menu and food preparation for Seven Seas Explorer’s gourmet dining options, including its new Pan-Asian specialty restaurant, Pacific Rim, and new French restaurant, Chartreuse. A native of Limoges, France, the chef has served aboard Regent ships since 2007.

Solaire, who joined Regent in 2008, has been a cruise director aboard all its ships. He has performed at sea for more than 40 years and is a singer, puppeteer, comedian and ventriloquist.