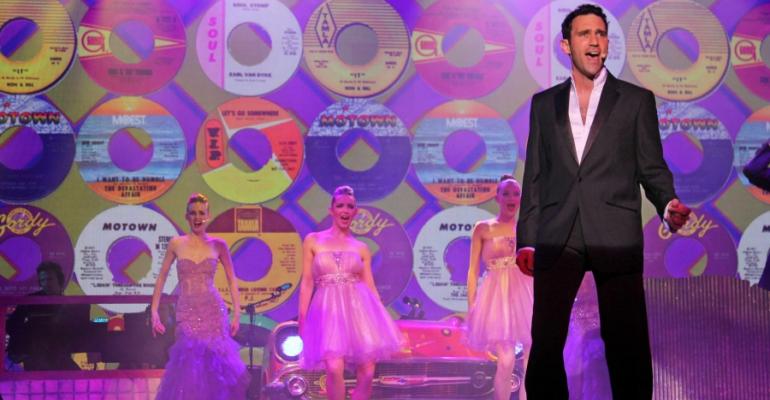 New shows span wide range of genres, from cirque to Broadway to Motown

Regent Seven Seas Cruises introduced 12 new productions aboard its three ships as part of an entertainment upgrade over the past 14 months. The shows were exclusively developed for the line by Jean Ann Ryan Productions.

Included are thematic performances ranging from aerial artistry in cirque shows to musical numbers with favorite songs from stage, screen, radio and television. All shows use a newly installed, full-stage LED video wall to help transport the audience to such locales as the Moulin Rouge or to the set of a classic television show.

Aboard Seven Seas Mariner, 'Cirque Rock 'n' Roll' offers a musical tour from Elvis Presley to Michael Jackson and Aerosmith to Beyoncé. Featured are aerial performances on a multilevel industrial steel apparatus. 'Dancing in the Streets' is an orchestrated medley with music from the Four Tops, the Temptations, Lionel Richie and The Jackson Five. 'Film Flashback' brings the '80s to life with scenes from 'Flash Dance,' 'Footloose' and 'Dirty Dancing.'

On Seven Seas Navigator, 'The Piano Men' offers songs by Elton John and Billy Joel performed by the Regent Signature Orchestra, while 'Cirque Navigator' is set in a fantasy forest with modern dance, aerial feats, Celtic dance and classic ballroom routines. 'Broadway Tonight' has music from 'The Book of Mormon,' 'Kinky Boots,' 'Jersey Boys,' 'Rock of Ages' and 'Nice Work if You Can Get It.' The 1960s retrospective 'Dawning of Aquarius' features music from The 5th Dimension, the Beatles and the Rolling Stones.

Seven Seas Voyager's 'Cirque L’Amour' is tribute to Paris and its nightlife, with aerial ballet. 'Come Sail Away' resurrects the '70s with the music of disco divas Donna Summer, Gloria Gaynor and Alecia Bridges, as well as favorites by the Carpenters, the Bee Gees and television themes including 'M*A*S*H*,' among others. 'Dancing to the Hits' displays ballroom dance with music by Lady Gaga, Justin Timberlake and Adele.