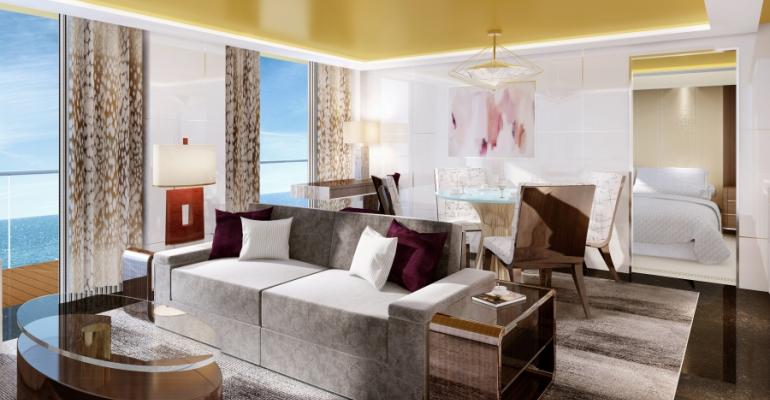 Marble is being laid in the restaurants, elaborate tilework is in place at the main pool and carpets are installed in the Observation Lounge and the casino. Designers like Dakota Jackson are dropping in to ensure the details are being implemented according to their vision.

'Right now it's a very exciting time, because we are close to completion,' says Massimo Arzani, gm of Seven Seas Explorer.

The clip shows the ship as a hive of activity at Fincantieri's Sestri Ponente yard. Viewers can see the elegant Compass Rose restaurant taking shape and the distinctive windows in the new pan-Asian restaurant, Pacific Rim, and get a feel for the immense volume of the Constellation Theater.

The day the video was filmed, Dakota Jackson was inspecting the progress on his 20 Seven Seas Suites.

Touted by Regent as 'the most luxurious ship ever built,' Seven Seas Explorer is scheduled to be named by Princess Charlene of Monaco at a July 13 evening event in Monte Carlo. The maiden cruise, from Monte Carlo to Venice, is set for July 20.