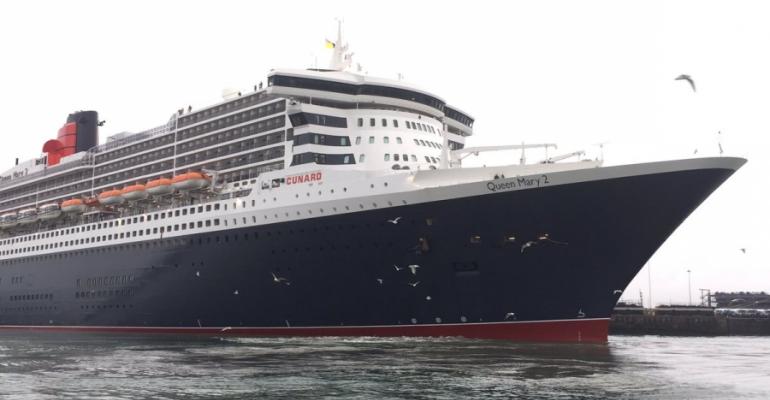 'Remastered' to the tune of $132m, Queen Mary 2 arrived back in her Southampton homeport Thursday for red-carpet events before a trans-Atlantic voyage to New York. The liner has undergone one of the most significant refurbishments in Cunard history at Blohm+Voss in Hamburg.

A fundraiser for The Prince's Trust, which helps young people facing issues such as homelessness or mental health problems, was held on board, and media were welcomed by Carnival UK ceo David Noyes.

During the remastering, Queen Mary 2 gained contemporary interior designs and experiences, some inspired by the original Queen Mary that launched at the height of the Art Deco erea of the 1930s.

The Queens Grill and Princess Grill suites and restaurants and Britannia staterooms were redesigned, the latter to be fully complete by the end of the year. Thirty more Britannia Club rooms were added, along with 15 Britannia single staterooms and five Britannia inside roms.

Key public spaces and restaurants were redesigned, including the transformation of the former Winter Garden into the Carinthia Lounge, the introduction of The Verandah as the ship’s new speciality restaurant (replacing Todd English) and the complete refresh and restructuring of the Kings Court, the ship’s buffet area. Ten kennels were added, too.

More than one million man hours have gone in to the refurbishment over a 25-day period. Some 594,000 square feet of carpets were laid, 4,000 new framed pictures were brought aboard and over 3,900 gallons of paint were applied to the hull.

Queen Mary 2's wine cellar now offers a selection of 486 fine wines and a collection of vintage ports that back to 1840.

'From her spectacular debut in 2004, to her current remastering, Queen Mary 2 continues to capture the imagination of those who experience her classic ocean liner voyages,' said Rick Meadows, president, Cunard North America.