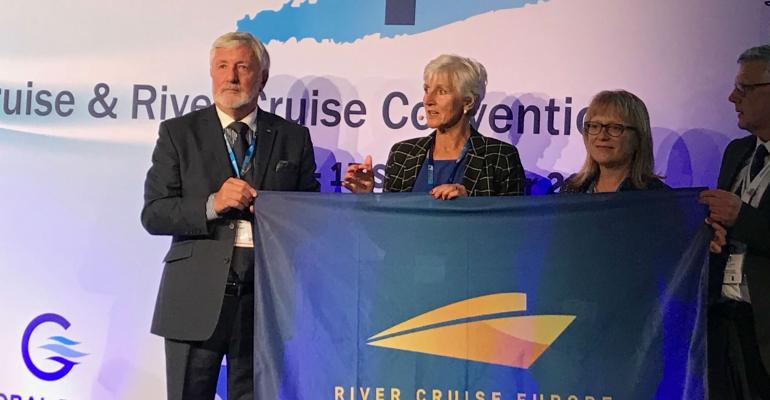 Together with Cruise Europe chairman Captain Michael McCarthy, she rolled out the new flag of River Cruise Europe, presenting the initiative's logo to the industry for the first time.

van der Heyden said the new initiative had been prepared under the umbrella of Cruise Europe since spring and already boasts 20 members.

River Cruise Europe is, as van der Heyden stressed, not a competition to the existing operator's association, IG RiverCruise, but on the contrary cooperating closely with IG RiverCruise.

The ambition of River Cruise Europe is to bring together river cruise operators, ports and destinations, incoming agencies and tour operators.

Topics to be dealt with include sustainability, the avoidance of crowding at hotspot destinations, and new regulations impacting the industry.

River Cruise Europe will constitute a platform for smaller and larger industry players alike. On Thursday morning, prior to the opening of Day 2 of Seatrade Europe, the new association is hosting a breakfast in Hamburg to present its plans and objectives more closely.

Sustainability as a core topic

All panellists agreed on the healthy state of the European river cruise industry which has seen stable prices and increasing demand both from continental and overseas source markets during recent years.

This boom, which to some extend exceeded expectations, has though in certain hotspot ports sparked overtourism concerns.

van der Heyden mentioned the extensive springtime interest in Amsterdam with a peak of calls during April as the tulip blossom takes place in the Netherlands.

Local residents have started to voice concerns over the large number of ship calls particularly at that time, complaining about the large number of incoming tourists but also about operational aspects such as noise emitted by the riverships' auxiliary engines.

‘While this noise is not regarded as particularly loud, its tone pitch is considered disruptive by some residents and while planning is underway, no area-wide shore power supply has yet been put in place.

Laukamp reminded of the port cities' responsibility to keep pace with the development and outlined the advantages of organised tourism – such as river ship calls – compared to individual tourism causing intense road traffic.

Schreiner used the example of shore excursion planning and confirmed that a better coordination of ship arrivals (and thus departure times of tour buses) can indeed help to reduce the impact of tour bus traffic in port cities.

He at the same time claimed that in the river cruise sector, more and more excursions are conducted without coach deployment, e.g. as cycling or walking tours.

The panel agreed that, while critics voiced against river cruising is significantly less intense than those against ocean cruising, sustainability remains a core topic.

Wirz gave various examples of how Uniworld tries to avoid waste – in particular plastic waste – by removing unnecessary items or transforming others to carbon-free, renewable materials.

Horstmann gave an insight into alternative propulsion, outlining that hybrid propulsion was an important trend for new river ships. He also spoke about the opportunities of automatization, admitting autonomous riverships are not to be expected in any near or medium-term future (and would be preceded by respective innovation in the inland cargo ships sector), adding though that decision-supporting systems are gaining relevance and assisting the crew with a benefit also for safety.

Crew recruitment as a challenge

Wirz described the recruitment of motivated, well-educated crew as one the industries main challenges for the future in his keynote address, a view fully seconded by his fellow panellists Laukamp and Schreiner.

Wirz said his company was approaching new labour markets, in particular in Southern Europe, though with varying success. While response from Greece was positive, potential employees from among others Spain showed less interest in river ship employment, possibly due to the fact that river cruising has only marginal importance in Spain.