Rostock-Warnemünde — history, and a bevy of cruise improvements 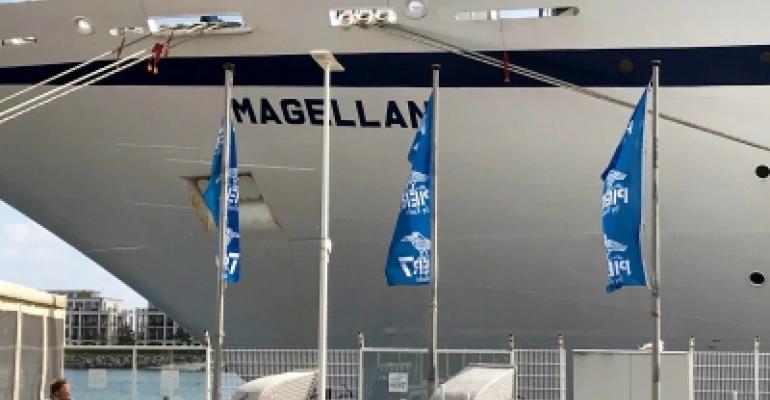 The Cruise Baltic familiarisation trip today visited the Hanseatic and university city of Rostock — a medieval town remarkable for its cobbled streets and historical architecture — to experience some of the ancient sites and places of interest.

The city is home to one of the area's oldest merchant houses, dating to 1490. It's known as the Tree House due to the large oak beam used in part of the structure running through the centre of the building.

Six new hotels are planned over the coming years.

Cruise operators such as Holland America use Rostock as a gateway to Berlin. Passenger ships generally dock at Warnemünde although Rostock has its own seaport to handle the larger ships or if Warnemünde reaches its three-berth capacity.

Cruise & Maritime Voyages' Magellan was in port today. This year some 199 cruise calls by 41 ships are expected between Rostock and Warnemünde. Seven maiden calls at the ports include Aegean Odyssey (currently out of service for engine repairs), Celebrity Reflection, Nieuw Statendam, Norwegian Pearl, Seabourn Ovation, Silver Spirit and Viking Jupiter.

A more than than €10m investment is going into a new passenger terminal at P8 at Warnemünde, expected to be completed in 2020, according to Lena Boerhoff in corporate communications at Rostock Port. 'The foundation stones of the building were laid at the end of 2018 and the construction of the building will continue mid-October,' she said.

Planning for a shore power installation is under way. A declaration of intent with AIDA Cruises was signed last summer to promote sustainable cruising at the port.

The train station at the port is being completely rebuilt. ‘Passengers will be able to walk through a tunnel close to the port, which will offer easy accessibility. A new track will be laid, dedicated to cruise ships, offering guests direct access back to the terminal,' Boerhoff said. For the season 80 trains will run from Warnemünde to Berlin, especially for cruise passengers. Completion is expected 2020.