A rousing musical naming for Anthem of the Seas in Southampton 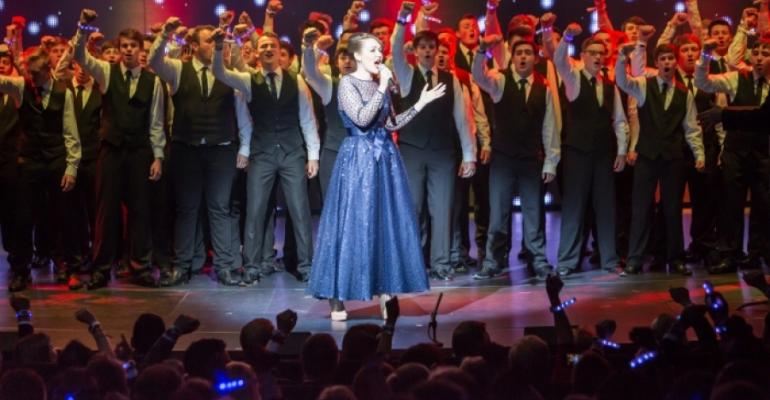 Suited to a ship called Anthem of the Seas, it was a music-filled naming ceremony when UK travel agent godmother Emma Wilby belted out a spirited song backed by the Welsh choir Only Boys Aloud.

Monday afternoon's festivities kicked off with DJ Womso spinning to a kaleidoscope light show and a pounding rendition of Queen's 'We Are the Champions' by the Royal Caribbean Singers. Reading's Scottish Pipe Band had Royal Caribbean chairman and ceo Richard Fain and Royal Caribbean International president Michael Bayley tapping their toes on stage.

The naming ceremony guests jumped to their feet after godmother Wilby's performance and Only Boys Aloud dispersed to help the audience sing different chords while pumping their arms with flashing Xylobands. Then Wilby signaled the release of a bottle of Perrier-Jouët Champagne from the North Star viewing pod, which smashed against the ship.

Wilby was selected in a competition to find an exceptional woman who reflects Royal Caribbean's travel partners and its notoriety for entertainment while giving back to her community.

It was serendipity that Wilby also has ships in her blood. She's descended from the head foreman shipwright at the Austin & Pickersgill shipyard.

In introducing her, a delighted Fain said: 'We have the granddaughter of a shipwright. I'm so excited!'