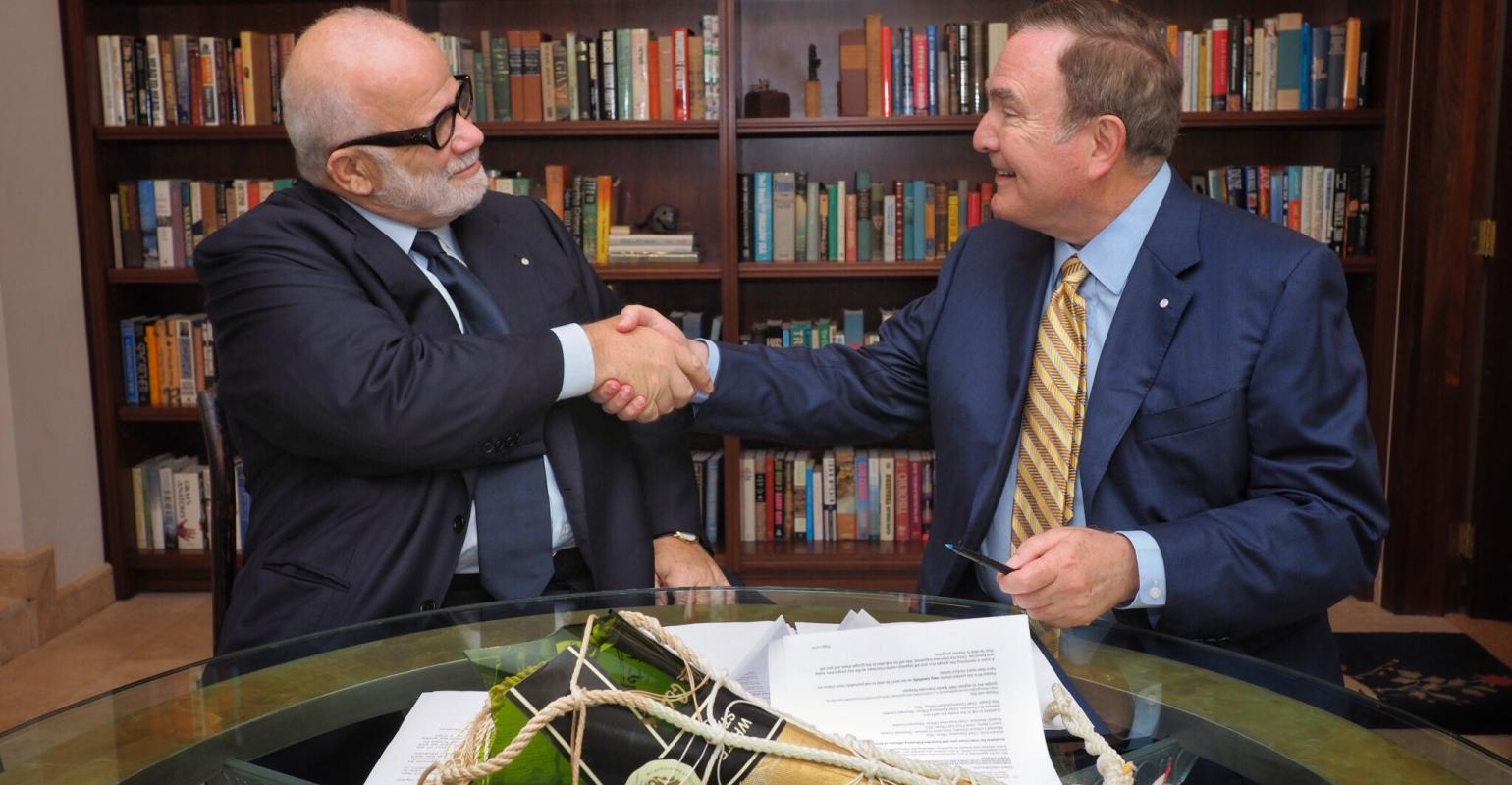 Royal Caribbean Cruises Ltd. is acquiring what chairman and CEO Richard Fain called 'a crown jewel,' Silversea Cruises. RCL is taking a 66.7% stake for $1bn and assuming about $500m in debt, based on an enterprise value of approximately $2bn, and Fain said he's 'thrilled beyond words.'

With this, one of cruising's largest public companies expands into the luxury and expedition sectors, while one of the industry's few privately held brands will get the chance to grow faster under the continued leadership of its executive chairman, Manfredi Lefebvre d'Ovidio.

Silversea operates nine ships, four of those in the expedition sector, and has two newbuilds, Silver Moon and Silver Dawn, under construction for delivery in 2020 and 2021, with an option for a sister ship. (In summer 2019, the expedition vessel Silver Discoverer will be going back to its charterer, SunStone Ships.)

RCL plans to finance the purchase through debt. In addition, Lefebvre will qualify for an estimated contingent consideration of approximately 472,000 RCL shares, payable upon achievement of certain 2019-2020 performance metrics.

'Silversea is a crown jewel, and the acknowledged leader in luxury and expedition cruising, two key markets that are poised for growth,' Fain said. 'Uniting our two companies presents an extraordinary opportunity to expand vacation options for guests and create revenue in strategic growth areas.'

He added: 'We are proud to welcome aboard Manfredi Lefebvre, a visionary leader whose high standards and history of innovation we deeply respect. Manfredi will remain executive chairman of Silversea, continuing to lead its strategy long term.'

'This partnership will bolster the growth of this exceptional brand founded by my father,' Lefebvre said. 'I have always been kindred spirits with Richard and we share a vision of offering excellence and leadership to our guests. This new partnership gives Silversea the opportunity to accelerate the growth of the most successful luxury and expedition cruising brand in the world.'

Fain said the acquisition—expected to be completed later in the year—'fleshes out Royal Caribbean's portfolio' in the ultra-luxury and expedition areas where 'Silversea is a name to be reckoned with.' For RCL it's 'a dream come true.'

For Lefebvre, selling control of his family's company is 'not something to do with a light heart. I've been dedicated to the cruise line like my child. At the end of the day, if you love a child, if you love a company, you want the best for it. The best for Silversea is partnering with Royal Caribbean.

'I never would have considered something of this kind with a financial investor,' he said. Though Lefebvre gives up some of his freedom in the RCL deal, he sees great upside.

'I've been approached constantly, by Asians, financial companies, other competitors, other industries,' he told Seatrade Cruise News. 'I was always reluctant ... [But] with Royal Caribbean, it's really a culture of partnership.' He cited the 'great success' of RCL's TUI Cruises joint venture, his shared values with Fain and RCL's penchant for innovation.

How the deal came about

A little over a year ago, Lefebvre was looking for a minority investor. 'I took the opportunity to suggest we could do more than a financial investor could for his baby,' Fain recounted, quipping that Lefebvre's reaction was to throw him out.

But they kept talking.

By virtue of working together in industry collaborations like Cruise Lines International Association, they found many similarities: their vision of how employees should be treated, views on market growth, safety and security and a commitment to the environment and destination sustainability.

Fain said about three months ago, Lefebvre was willing to listen to his ideas about 'how the best thing for a child is to spread its wings,' adding that Royal Caribbean could learn from the 'success of Silversea and how the management team led it to the pinnacle of luxury cruising.'

'We're starting now,' Lefebvre said, 'toward our goal of incremental growth and value creation.' He did not elaborate, though, on whether Silversea will extend its luxury orderbook or perhaps build an expedition ship, which has long been under consideration.

Silversea CEO Roberto Martinoli will continue in his role, working with the existing management team. 'We have a fantastic team in the Americas, Europe, the UK, Asia and Australia,' Lefebvre said. 'It's an excellent team, working well. There is so much to achieve by pushing the accelerator. I'm sure there will be other areas [of the world] that have growth potential with Royal Caribbean.'

As for Silversea's Monaco headquarters and its offices in Miami and elsewhere, it will be 'business as usual.'

'A lot of synergies are possible,' according to Fain. For example, RCL pays lower credit card fees than Silversea, and makes fuel purchases all over the world, while he learned—to his chagrin—that Silversea pays less for some items.

A big area where Silversea can benefit is from RCL's broad distribution network. Lefebvre sees 'incredible potential for outreach to travel agents.'

Silversea visits far more destinations—nearly 1,000—which could be beneficial to RCL and certainly expands its scope.

Via Celebrity Cruises, RCL fields an expedition ship in the Galápagos, where Silversea also has a vessel, and is building another ship for that market, Celebrity Flora. When it comes to the possibility of moving ships among brands, Fain said there are 'no plans to make those kinds of changes but we don't know what will happen in the future.'

Regarding 2018, Royal Caribbean reconfirmed its latest adjusted earnings per share guidance of $8.70 to $8.90. This does not include any potential impact from the transaction, although RCL does not expect that to materially impact near-term adjusted EPS.

Operationally, the company’s forecast for the third and fourth quarters remains unchanged, but higher fuel prices and the strength of the dollar are expected to cost roughly 25 cents per share. Strong close-in demand for core products and better than expected performance below the line are expected to drive improved Q2 results. This is expected to completely offset the impact of the foreign exchange and fuel headwinds in the second half of the year, which allows RCL to maintain its 2018 guidance.

Silversea was the brainchild of Antonio Lefebvre d’Ovidio, a noted Italian jurist and law professor who wanted to create a new class of spacious ships with highly personalized service. In 1988, he purchased the majority of Sitmar Cruises, merging it with P&O's Princess Cruises a year later. In 1994, he launched Silversea Cruises with two purpose-built ships.

His son Manfredi, who had been involved in the family's businesses from an early age, managed ship operations. He took control of the company and became chairman in 2001.