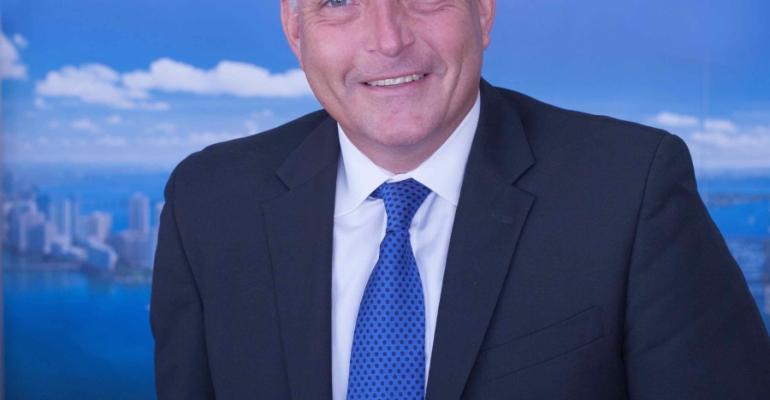 This will be the first private company to build its own cruise terminal at the port. Plus, the size of the site to be leased and the term—20 years with an option to extend to a whopping 60 years—are firsts and not just for Miami but, Kuryla believes, for the state of Florida.

'It will be a win-win-win—for Miami-Dade County, PortMiami and Royal Caribbean,' he said, adding the terms are 'terrific for the port and for Royal Caribbean. They will finance, build, operate and maintain the terminal.'

Plus, there's that sweeping 400-meter berth that 'gives Royal Caribbean the ability to operate not only the Oasis class but whatever else gets bigger in the future,' Kuryla said.

Royal Caribbean has Oasis 4 coming in late 2018, which would be neatly timed with the targeted completion of the terminal. But neither Kuryla nor a Royal Caribbean spokesman was ready to identify a specific ship for what's being called Cruise Terminal A. Both said a number of vessels have been discussed.

Though it's too early for details about the building itself, Royal Caribbean plans a 'very efficient terminal capable of processing passengers from the curb to the ship very quickly. It's going to be a spectacular terminal,' Kuryla added.

He's 'very confident' the aggressive timeline for the construction can be met.

The 10-acre patch of land to the east of the existing cruise terminals in an area that's partly for cargo operations is underutilized. It generates about $1.2m in annual revenue for the county. The current value of the guaranteed portion of the long-term deal with Royal Caribbean would be $250m for the port after up-front costs.

Some land will have to be cut for the 400-meter berth. The port will be responsible for that and commit to dredging and maintaining a channel of at least 36 feet (11 meters), Kuryla said.

'The ships are going to keep getting bigger. Very soon we will see 1.9 million to 2 million passengers operating out of a terminal,' Kuryla said.

The PortMiami 2035 Master Plan envisions two more berths along the north channel than the six currently. East of Royal Caribbean's planned Cruise Terminal A is space for Cruise Terminal AA, which would be the last possible berth on the north side. In a memorandum of understanding to be considered by county commissioners on Sept. 16, the port is asking Royal Caribbean to include a blueprint for AA that's compatible but separate from A.

Kuryla said options for AA are still under consideration. More information is expected to become public at the end of 2015.

Meanwhile, Royal Caribbean has a contractual guarantee for 325,000 passengers a year for the preferential use of Cruise Terminal G through 2021. The MOU envisions amending those terms. Kuryla said Royal Caribbean is interested in having two berths.

Currently Miami handles 730,000 Royal Caribbean passengers a year, about 15% of its overall traffic. That would go to about 33% in 2019, with 1.8m passengers out of a projected 5.8m to 6m total, assuming the volumes from other companies hold steady.

In May 1998, Royal Caribbean became the first operator to commit to a major deal in Miami, 10 years with a $60m guarantee. That was topped in October 1998 by Carnival with a $183m, 15-year commitment. Two months later, Royal Caribbean raised its ante to $160m over 15 years.

But an initial 20-year term with options for 40 more is—as Kuryla said—unprecedented.

If county commissioners approve the MOU next week at a meeting Royal Caribbean chairman and ceo Richard Fain and president and chief operating officer Adam Goldstein are expected to attend, further work will take place over the next 120 days on specifics, including structuring the ground lease and the terminal operating agreement.

Royal Caribbean's news is the latest is a string of cruise developments for PortMiami. Norwegian Cruise Line's biggest ship, Norwegian Escape, starts year-round service in November, new Carnival Corp. brand Fathom begins sailing in the spring with the first direct to Cuba cruises from the US in decades, and Carnival Vista joins the full-calendar roster in late 2016.

MSC Cruises is going year-round, too, first with MSC Divina then, in 2017, adding MSC Seaside, the first in a new class of ship. Virgin Cruises will begin homeporting in 2020.